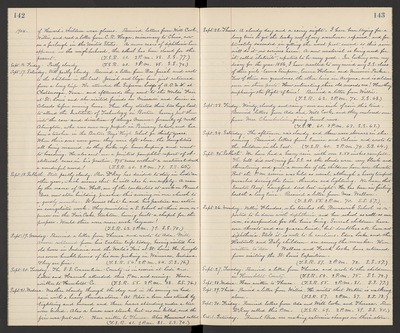 1904. of Howard's children wear glasses. Received letters from Will Cooke, Willie, and read a letter from C.R. Hager, missionary to China, now on a furlough in the United States. As more cases of diphtheria have appeared in the neighborhood, the school has been closed for the present. (T.S.R. 60. 2 P.M. 88. S.S. 77.)

Sept. 17. Saturday. Still partly cloudy. Received a letter from Bro. Josiah and wrote to the children in the East. Josiah and Eliza have just returned from a long trip. He attended the Supreme Lodge of A.O.U.U. at Chattanooga, Tenn. and afterwards they went to the Worlds' Fair at St. Louis and she visited friends in Missouri and Louise in Colorado before coming home. Then started their two boys East, to attend the Institute of Technology in Boston, having put them into the care and direction of Alonzo Meserve, formerly of North Abington, who was once my pupil in Primary School, and has been a teacher in the Boston Boys' High School for thirty years. When their sons were gone they were left alone, the daughters all being married, so they broke up housekeeping and went to boarding. He also sent me a printed pamphlet report of obstetrical cases in his practice, 975 cases without a maternal death a wonderful record! (T.S.R. 60. 2 P.M. 77. S.S. 65.)

Sept. 18. Sabbath. Still partly cloudy. Rev. DeKay has decided to stay in Lodi an other year, which means that he will also be our supply. A man by the name of Mr. Hall, one of the contractors at work on Bruml Bros. new store building, preached this evening in our church to a goodly number. It seems that he and his partner are active in evangelistic work. They maintain a S. School at their own expense in the Fair Oaks, Stockton, having a built a chapel for the purpose. Would there were more such laymen! (T.S.R. 63. 2 P.M. 79. S.S. 72.)

Sept. 19 .Monday. Received a letter from Theresa and wrote to Ada. Will Moore returned from his Eastern trip today, having visited his old home in Indiana and the World's Fair at St. Louis. He brought us some huckleberries of his own picking in Winamac, Indiana. They are fine. (T.S.R. 56. 2 P.M. 84. S.S. 76.)

Sept. 21. Wednes. Weather cloudy through the day and in the evening we had rain with a heavy thunder storm. At Peters a barn was struck by lightning and burned and three horses standing under a tree were killed. Also a house was struck, but no one killed, and the fire was put out. Have written to Theresa. Alice Hammond called. (T.S.R. 61. 2 P.M. 81. S.S. 70.

Sept. 22. Thurs. A cloudy day and a rainy night. I have been trying for a long time to get the leaky roof of my warehouse repaired, and fortunately succeeded in getting the worst part covered so this rain will do it no serious harm. A new material is being used for it, called "elatirite," reputed to be very good. In looking over my diary for the year 1856, I have recalled to my mind my S.S. class of three girls - Emma Simpson, Emma Holman and Missouri Parker. Two of them are grandmas, the other lives in Arizona, and is seldom seen in these parts. How interesting these old records are! How they emphasize the flight of time! Received a letter from Willie. (T.S.R. 62. 2 P.M. 72. S.S. 68.)

Sept. 25. Sabbath. We have had a heavy rain with over 2.50 inches rainfall. The bell did not ring for S.S. as the clouds were very black and threatening and quite a number of the children have sore throats. But the P.M. service was held as usual, although a heavy tempest prevailed during the time - thunder and lightning. We learn that Senator Benj. Langford died last night. He has been in failing health a long time. Received a letter from Mrs. Wallace. (T.S.R. 55. 2 P.M. 70. S.S. 57.)

Sept. 26. Monday. Nellie Flanders, who teaches the Brunswick School is reported to be down with diphtheria, and her school as well as our own, is suspended for the time being. Several children have sore throats and are quarantined, but doubtless all have not diphtheria. Still it is well to be cautious. Edna Locke and the Hartwell and Daly children are among the number. Have written to Ada. Wallace and Frank Locke have returned from visiting the St. Louis Exposition. (T.S.R. 57. 2 P.M. 72. S.S. 57.)