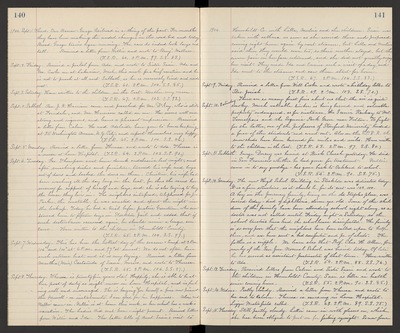 1904. Sept. 1. Thurs. Our Narrow-Guage Railroad is a thing of the past. For months they have been making the needed changes in the road bed and today Broad-Guage trains began running. The cars do indeed look large and tall. Received a letter from Willie and wrote to Benj. Wallace. (T.S.R. 60. 2 P.M. 97. S.S. 83.)

Sept. 4. Sabbath. Rev. J.K. Harrison came and preached for Mr. DeKay, who is still at Ferndale, and Mr. Harrison called on me. He seems well and strong and vigorous, and leaves a pleasant impression. Received a letter from Calvin. He and Adelaide have gone to house keeping at 311 Washington Avenue, N.Y. City, and report themselves very happy. (T.S.R. 65. 2 P.M. 100. S.S. 86.)

Sept. 6. Tuesday. Geo. Thompson went home drunk and abusive last night, and after smashing dishes and furniture, turned his wife and boys out of doors and locked the doors on them. Christine, his wife, had been washing all the day long in the heat, for thus she earns her money for support of herself and boys, and she is also trying to buy the house they live in. The neighbors interfered, telephoned for Joe parker, the constable, he was arrested and spent the night in the lockup. Today he had a trial before Justice Garretson, who sentenced him to fifteen days in Stockton Jail and added that if such disturbance occurred again, he should receive a longer sentence. Have written to the children in Humboldt County. (T.S.R. 65. 2 P.M. 104. S.S. 97.)

Sept. 8. Thursday. Theresa is twenty five years old! Happily, she is able to be at her post of duty as night nurse in Lane Hospital, and is feeling well and encouraged. She is buying for herself a fine new piano - the Merrill - on installments. I am glad for her happiness. Alice and Nellie came in. Nellie is at home this week, as her school has a week's vacation. The Ladies Aid met here - right present. Received letters from Willie and Ida. The latter tells of Aunt Susie's visit to

1904. Humboldt Co. with Lilla, Mertice and the children. Susie was taken with asthma as soon as she arrived there and proposed coming right home again by next steamer, but Lilla and Mertice said then they would come too, so their mother stayed, but the severe pain in her face returned, and she did not greatly enjoy her visit. They made Ida and Eunice each a visit of a day, and Ida went to the steamer and saw them start for home. (T.S.R. 67. 2 P.M. 104. S.S. 83.)

Sept. 10. Saturday. There are so many forest fires about us that the air is quite smoky. Much valuable timber is being burned and valuable property endangered, as for instance, the Scenic Railway to Mt. Tamalpais and the Sequoia Park Grove near Felton. To fight for the latter, one of the professors of Stanford University headed a force of the students and went out. Also on the S.P.R.R. the snow sheds have been burned for miles and miles. Have written to the children in the East. (T.S.R. 63. 2 P.M. 97. S.S. 80.)

Sept. 12. Monday. The new High School Building in Stockton was dedicated today. It is a fine structure, as it should be, for its cost was $102,000. A boy in the Journay family, living on the old Staples place, was buried today - died of diphtheria, eleven yrs. old. Some of the children of the family have been attending school right along, as a doctor was not called until Friday night on Saturday, so the school trustees have had the school house disinfected. The family is so very poor that the neighbors have been called upon the help them, and we have sent a bed comforted and pr. of sheets. The father is a cripple. We learn also that Prof. Chas. H. Allen, formerly of the San Jose Normal School, was buried today. Of late he has served as assistant postmaster of that town. Have written to Ada. (T.S.R. 54. 2 P.M. 88. S.S. 76.)

Sept. 15. Thursday. Still partly cloudy. Lottie came in with glasses on, which she has been obliged to put on for failing eyesight. So now four