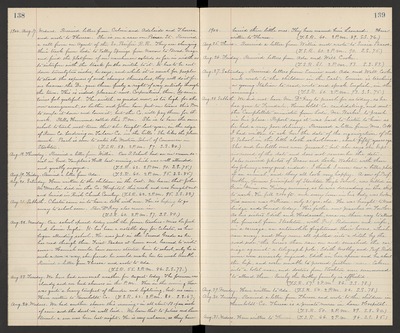 1904. Aug. 17. Wednes. Received letters from Calvin and Adelaide and Theresa and wrote to Theresa. She is on a case on Pierce St. Received a call from an Agent of the So. Pacific R.R. They are changing their track from Lodi to Valley Springs from Narrow to Broad Guage and find the platform of our warehouse extends so far in width as to interfere with the track for the switch to it. It has to be cut down twenty two inches, he says, and while it is usual for people to stand the expenses of such changes themselves, they will do it for us because the Dr. gave them freely a right of way entirely through the town. This is indeed pleasant news. Corporations, then, do some times feel grateful. The switch, as graded now, is too high for the new arrangement, so Luther and John have put on teams this P.M. to scrape it down and lower it, but the Co. will pay them for the work. Stella Hammond called this P.M. She is to have the same school to teach next term that the taught last year, in the edge of Kern Co. bordering on Tulare Co. in the hills. She likes the place much. Pearl is soon to enter the Western School of Commerce in Stockton. (T.S.R. 58. 2 P.M. 97. S.S. 80.)

Aug. 22. Monday. Our school opened today with the former teachers - Miss Lu Jack and Louise Inglis. It has been a notable day for Celeste, as he began attending school. He was put in the Second Grade as he has read through three First Readers at home and learned to write some. Hannah would have sooner started him to school, only he is such a run-a-way, she feared he would make her too much trouble. Received a letter from Theresa and wrote to Ada. (T.S.R. 55. 2 P.M. 86. S.S. 77.)

Aug. 23. Tuesday. We have had unusual weather for August today. The forenoon was cloudy and we had showers in the P.M. Then in the evening there was quite a heavy tempest of thunder and lightning, but no rain. Have written to Humboldt Co. (T.S.R. 62. 2 P.M. 80. S.S. 67.)

Aug. 24. Wednes. We had another shower this morning - in all about 13 of an inch of rain and the dust is well laid. We learn that to Julius and Laura Bruml a son was born last night. He is very welcome, as they have

Aug. 28. Sabbath. We did not have Mr. DeKay to preach for us today, as he has gone to Ferndale, Humboldt Co. candidating, and sent the Campbellite minister from Lodi, Mr. Barber to preach in his place. Report says it was hard to listen to him as he had a very poor delivery. Received a letter from Mrs. Cobb. I had written to ask her the date of the organization of the S. School in the little cloth schoolhouse, about fifty years ago. She and her little ones were present, but she says she kept no record of the date and does not remember the date. I also received photos of Dean and Locke Webster with their dog Johnny - very good indeed. I think I never saw a better photo of an animal, and they all look very happy. A son of Prof. Mobley, former principal of Stockton High School, was killed in Gwin Mine on Friday morning, as he was descending in the skip to work. He fell 2000 ft. and every bone in his body was broken. His name was William - only 21 yrs. old. He was brought to Wood bridge and buried today. His father now preaches in Fowler. As his sisters Edith and Hadassah, were on their way to attend the funeral from Stockton, with Prof. Ridenour and wife, in a carriage, an automobile frightened their horses, which ran away, and they were all spilled into a ditch by the road side, the horses than ran on and smashed the carriage against a telegraph pole. Edith Mobley and Prof. Ridenour wear seriously injured, Edith in her spine and he about the hip, and were unable to proceed farther-were- taken into a hotel near, and doctors from Stockton were summoned to attend them. Surely the Mobley family is afflicted. (T.S.R. 57. 2 P.M. 86. S.S. 73.)