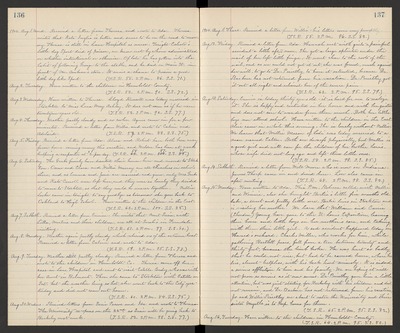 1904. Aug. 1. Mond. Received a letter from Theresa and wrote to Ada. Theresa writes that Kate Inglis is better and seems to be on the road to recovery. Theresa is still in Lane Hospital as nurse. Tonight Celeste's little dog Sport died of poison, we know not by whom administered or whether intentional or otherwise. Of late he has gotten into the habit of following George to the stable, and he lied on Main St.. in front of Mr. Ambrose's store. It seems a shame to poison a good little dog like Sport. (T.S.R. 55. 2 P.M. 86. S.S. 71.)

Aug. 6. Saturday. The Grubs family have deserted their house here and moved to Stockton. Oscar and Clara and Willie Murray are all teachers in schools there, and as Emma and Josie are married and gone, only Mrs. Grubs and Kate Carroll were left here, and they were so lonely they decided to move to Stockton, so that they could be nearer together. Nellie Locke came in tonight to say goodbye as tomorrow she goes back to Oakland to High School. Have written to the children in the East. (T.S.R. 62. 2 P.M. 100. S.S. 85.)

Aug. 9. Tuesday. Weather still partly cloudy. Received a letter from Theresa and wrote to the children in Humboldt Co. Theresa came off her case in Lane Hospital and went to visit Estelle Condy, who was with her Aunt in Belmont. Then she came to Stockton with Estelle on Sat. but the weather being so hot, she went back to the City yesterday and did not come out home. (T.S.R. 60. 2 P.M. 84. S.S. 75.)

Aug. 12. Friday. Received a letter from Ada. Hannah met with quite a painful accident a little afternoon. She got a large splinter under the nail of her left little finger. It went clear to the roots of the nail, and as we could not get it out, she was forced, much against her will, to go to Dr. Priestley to have it extracted, because Dr. Barbour has not returned from his vacation. Dr. Priestley got it out all right and relieved her of the severe pain. (T.S.R. 62. 2 P.M. 95. S.S. 79.)

Aug. 13. Saturday. Eunice is today thirty years old - it is hard for me to realize it. She is happy and contented in her home and with her guitar and does not care to wander from them much. Both her little boys now attend school. Have written to the children in the East. Alice came in awhile this evening. She is lonely without Nellie. We learn that Mille Mason of Lodi was today married to a man named Eaton. Both are dwarfs physically, but Nellie is a good girl and will care for the children of her brother Lewis, whose wife died not long ago and left three little ones. (T.S.R. 58. 2 P.M. 98. S.S. 85.)

Aug. 15. Monday. Have written to Ada. This P.M. Rebecca called with Nellie and Winnie, also she brought Bertie's little five months old babe, a sweet and pretty little one. Bertie lives in Stockton and is visiting her mother. We learn that William and Carrie (Sherden) Young have gone to the St. Louis Exposition, leaving their home and little boys in her mother's care, and taking with them their little girl. A sad accident happened today in Howard's orchard. Charles Miller, who works for him, while gathering Bartlett pears, fell from a tree between twenty and thirty feet, because the limb broke. He was hurt so badly that he could not rise, but had to be carried home, where he lies, almost helpless, with his back hurt seriously. It is indeed a serious affliction to him and his family. We are hoping it will not prove so serious as it now seems. Dr. Priestley gave him a little attention, but was just starting for Berkeley with his children and did not remain, and Dr. Barbour has not returned from his vacation Jo and Willy Priestley are about to enter the University and their sister Myrtle is to keep house for them. (T.S.R. 65. 2 P.M. 95. S.S. 82.)