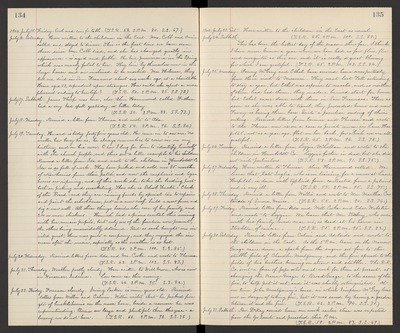 July 16. Saturday. Have written to the children in the East. Mrs. Cobb and Annie called and stayed to dinner. This is the first time we have seen them since Mr. Cobb died, and she has changed greatly in appearance - is aged and feeble. She had pneumonia in the Spring which was nearly fatal to her. They live by themselves now in the large house and are inclined to be morbid. Mrs. Holman, they tell us, died in San Francisco about six weeks ago, at a charitable Home, aged 83, dependent upon strangers. How could she expect a more pleasant ending to her life? (T.S.R. 50. 2 P.M. 85. S.S. 73.)

July 19. Tuesday. Howard is today forty five years old. He came in to see me. No matter how busy he is, he always remembers to come in on my birthday and on his own. O how I long for him to identify himself with the church people, and thus set a better example to his children. Received a letter from Ida and wrote to the children in Humboldt Co. Ida is so full of work. They have picked and sold over $85. worth of strawberries from their patch, and now the raspberries and loganberries are ripening, and of this work she takes the leading part both in picking and marketing. Then she is School Trustee - Clerk of the Board - and they are raising funds by special tax to repair and paint the school house, put on a new roof, build a new fence and dig a new well. All these things besides the care of her family and 200 or more chickens. Hannah had a piano recital this evening with her music pupils, but only six of the fourteen were present, the others being unavoidably detained. But as each brought one invited guest, there was quite a company, and they enjoyed the ice cream after the music, especially as the weather is so hot. (T.S.R. 60. 2 P.M. 100. S.S. 85.)

July 22. Friday. Forenoon cloudy. Irving Parker is nine years old. Received letters from Willie and Calvin. Willie writes that he picked five qts. of huckleberries in the noon hour, beside a reservoir he was superintending. Berries are large and plentiful there this year - a luxury we do not have. (T.S.R. 66. 2 P.M. 98. S.S. 78.)

July 25. Monday. Fanny McGary and Ethel have arrived home unexpectedly from their visit to Missouri. They went last Fall intending to stay a year, but Ethel was exposed to measles, and as neither of them had had them, they made a hurried start for home but Ethel came down with them in San Francisco. Then as soon as she was able to travel, they proceeded home and now Fanny is having them here. Quite a peculiar ending of their outing. Received letters from Eunice and Theresa and wrote to Ada. Theresa now is on a case as private nurse in Lane Hospital, not as a year ago, flat on her back, for which we are all grateful. (T.S.R. 65. 2 P.M. 96. S.S. 78.)

July 27. Wednesday. Have written to Theresa. Alice Hammond called. We learn that Kate Ingles, who is in training for a nurse at Lane Hospital, is down with typhoid fever, contracted from a patient and is very ill. (T.S.R. 55. 2 P.M. 95. S.S. 75.)

July 30. Saturday. Received letters from Calvin and Adelaide and wrote to the children in the East. As the 5 P.M. train on the Narrow Guage came down, a spark from the engine set fire to the stubble fields of Chandler Montgomery, and the fire spread to the fileds of his brother, burning on straw and stubble. The R.R. Co. sent a force of Japs who are at work for them at present, at changing the Narrow-Guage to Broad-Guage, to the scene of the fire to help put it out, and it was shortly extinguished. At one time, John Montgomery's house, in which Simpson McGary lives was in danger of taking fire, but it was saved by having a garden between it and the fire. (T.S.R. 62. 2 P.M. 94. S.S. 70.)