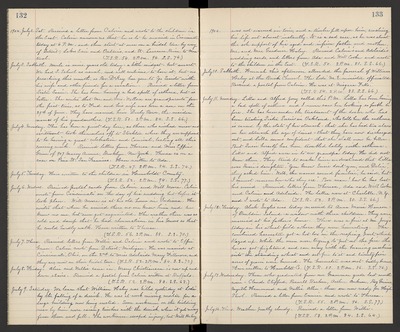 July 3. Sabbath. Merle is nine years old today, a little midget but smart. We had S. School as usual, and will continue to have it, but no preaching this month, as Rev. DeKay has gone to Yo Semite with his wife and other friends for a vacation. Received a letter from Sister Susie has been having a bad spell of asthma, but is better. She writes that Mr. and Mrs. Wallace are grandparents for the first time, as to Fred and his wife was born a son on the 29th of June. They have named him Derby Rowe, the maiden names of his grandmothers. (T.S.R. 50. 2 P.M. 84. S.S. 66.)

July 4. Monday. This has been a quiet day here, as those who wished noise and excitement took themselves off to Stockton where they are supposed to be having a great celebration and Carnival, lasting all this coming week. Received letters from Theresa and Miss Effie Green of 927 Marcy Avenue, Brooklyn, New York. Theresa is on a case on Pine St. San Francisco. Have written to Ada. (T.S.R. 47. 2 P.M. 84. S.S. 74.)

July 6. Wednes. Received postal cards from Calvin and Will Moore. Calvin wrote from Cincinnati on the day of his wedding but before it took place. Will Moore is at his old home in Indiana. He writes that when he arrived there no one knew him and he knew no one, but soon got acquainted. The weather there was so cold and damp that he had rheumatism in his knees so that he could hardly walk. Have written to Theresa. (T.S.R. 56. 2 P.M. 88. S.S. 70.)

July 7. Thurs. Received letters from Willie and Calvin and wrote to Effie Green. Calvin wrote from Detroit, Michigan. he was married at Cincinnati, Ohio, on the 2nd to Miss Adelaide Mary Fillmore, and they are now on their bridal tour. (T.S.R. 52. 2 P.M. 84. S.S. 70.)

July 9. Saturday. We learn that William Haley was killed yesterday at Lodi by the falling of a derrick. He was at work mixing mortar for a large building now being erected. Some workmen on the building near by him were raising timbers with the derrick, when it got away from them and fell. The workmen escaped injury, but Will Haley

1904. was not warned in time, and a timber fell upon him, crushing his life out almost instantly. It is a sad case, as he was almost the sole support of his aged and infirm father and mother, Mr. and Mrs. Gardiner Haley. Received Calvin's and Adelaide's wedding cards, and letters from Ada and Will Cooke and wrote to the children in the East. (T.S.R. 50. 2 P.M. 81. S.S. 66.)

July 11. Monday. Lilla and Alfred Jory called this P.M. Lilla has been having a bad spell of asthma and I never saw her looking so feeble before. She has been under the treatment of the doctor who has been treating Sister Susie in Oakland. Who tells her the asthma is caused by the state of her stomach, that she has had two ulcers on her stomach the size of dines - that they have now discharged out, and Lilla seems confident that she shall now be better. But Susie herself has been troubled lately with asthma. Lilla and Alfred were in to see grandpa today. He did not know them. They tried to make him understand and that Lilla was Susie's daughter. "You know Susie don't you, and Delia," they asked him. "Well, the names sound familiar," he said, "but I cannot remember who they are." Poor man! how he has lost his mind. Received letters from Theresa, Ada and Will Cooke and Calvin and Adelaide. The latter were at Charlotte, N.Y. and I wrote to Ada. (T.S.R. 52. 2 P.M. 80. S.S. 66.)

July 12. Tuesday. Aleck Inglis was today married to Anna Marie Hanson of Bouldin Island - a widow with three children. They were married at his father's home. There was a fire at Mr. Jory's today in his wheat field where they were harvesting. The combined harvester got a hot box in the reaping part, which blazed up. While the men were trying to put out the fire the horses got frightened and ran away with the burning machine into the standing wheat and set fire to it and twenty five acres of grain were burned. The harvester was not badly burned. Have written to Humboldt Co. (T.S.R. 52. 2 P.M. 86. S.S. 76.)