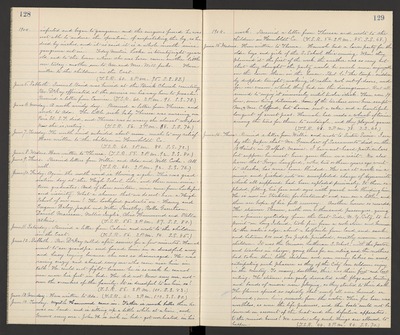 1904. infected and began to gangrene and the surgeons feared he was not able to endure the operation of amputating the leg, so he died by inches, and it is said it is a whole month since gangrene set in. Today Mertice Locke is twenty eight years old, and to the house where she was born came mother little one today - another son to Mr. and Mrs. Will Jacks. Have written to the children in the East. (T.S.R. 60. 2 P.M. 95. S.S. 83.)

June 10. Friday. Again the north wind is blowing a gale. This was graduation day at the High School, Lodi, and there were nineteen graduates. And of those nineteen, nine came from Lockeford and vicinity. What a shame that we do not have a High School of our own! The Lockeford graduates are - Henry and Eugene Daley, Joseph and Willie Priestley. Rolla Garretson, Daniel Marceau, Nellie Inglis, Alice Hammond and Stella Atkins. (T.S.R. 55. 2 P.M. 87. S.S. 80.)

June 12. Sabbath. Rev. DeKay called after service for a few minutes. Hannah went to see grandpa and found him in a dreadful way and Lucy crying because she was so discouraged. He was raving crazy and abused every one who came near him in talk. He could not fight because he is so weak he cannot even move his feet in bed. He did not know any one, not even the members of the family. It is dreadful to see him so! (T.S.R. 55. 2 P.M. 100. S.S. 83.)

June 14. Tuesday. Myrtle Hammond came in. Father is much better than he was on Sund. and is sitting up a little while at a time, and knows every one. John H. is sick in bed, got over heated in his

June 15. Wednes. Have written to Theresa. Hannah had a lawn party for the older boys and girls of the S. School this evening. When they planned it the first of the week, the weather was so very hot that they thought the party would be much more enjoyable on the lawn than in the house. But lo! The temp. suddenly dropped tonight, making it rather cool out-of-doors, and for ice cream, which they had in the dining room. But all seemed to enjoy it immensely until twelve o'clock. There were 19 here, some being detained. None of the teachers were here except Mr. & Mrs. Clifford, but Laura sent a cake and a beautiful bouquet of sweet peas. Hannah had made a cob web of twine among the tiers for them to untangle, and they played games. (T.S.R. 48. 2 P.M. 78. S.S. 60.)

June 16. Thurs. Received a letter from Willie and wrote to Sister Susie. I see by the paper that Mr. Greenlaw of Sacramento died on the 12th inst. in Belfast, Maine. I have not heard particulars but suppose he must have gone there on a visit. We also learn that George Langford, who, two or three years ago went to Alaska, has come home blinded. He was at work in a mine and picked into an unexploded charge of dynamite which all supposed had been exploded previously. It then exploded, filling his face and eyes with gravel and blinding him. He is now in Stockton for treatment and can see a little, and there are hopes of his full recovery. Another horror is recorded. The steamer Slocum, with over a thousand passengers, going on a picnic yesterday from the East Side, N. Y. City, to a point on Long Island, took fire from a cook stove and burned to the water's edge, about a half mile from land, and sank, and between 800 and 900 people perished, mostly women and children. It was the German Lutheran S. School, with the pastor and teachers in charge, going thus for an outing, and the mothers had taken their little children and even many babies in arms, anticipating such pleasure as they of the City can seldom enjoy in the country. To many, doubtless, this was their first and last outing. The steamer was gaily decorated with flags and bunting and bands of music were playing, as they started to their death. The flames spread so rapidly that nearly all were burned or drowned, some being rescued from the water. Their fire hose was worthless, so were the life preservers, and the boats could not be lowered on account of the heat and the defective apparatus. O the ruined homes! We wonder why such things are allowed to happen. (T.S.R. 44. 2 P.M. 84. S.S. 70.)