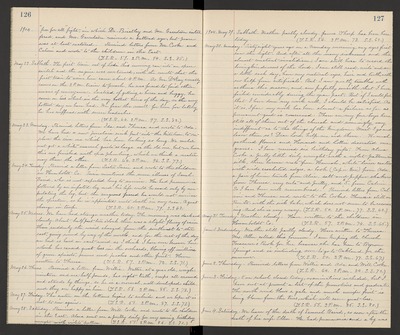 May 22. Sabbath. The first train out of Lodi this morning ran into an open switch and the engine was over turned, with the result that the first train to arrive here came about 4 P.M. As Mr. DeKay usually comes on the 2 P.M. train to preach, he was forced to find other means of conveyance. Instead of getting a horse and buggy, he came on his wheel in the very hottest time of the day, on the very hottest day we have had. We fear the result for him for lately he has suffered with severe headaches. (T.S.R. 64. 2 P.M. 97. S.S. 82.)

May 23. Monday. Received letters from Ida and Theresa and wrote to Ada. We have had a new porcelain sink put into the kitchen, to replace the iron one which has been leaking so long. We could not get a white enamel quite as large as the old one, but we have this one finished with open plumbing, which we think a neater way than the other. (T.S.R. 64. 2 P.M. 96. S.S. 77.)

May 24. Tuesday. Received a letter from Sister Susie and wrote to the children in Humboldt Co. Susie mentions the severe illness of Saml. Baird, who is not expected long to survive. He had pneumonia followed by an infected leg and his life could be saved only by amputating the leg, but the surgeons feared he would not survive the operation, so he is "appointed unto death" in any case. A great change in temp. (T.S.R. 60. 2 P.M. 79. S.S. 63.)

May 25. Wednes. We have had strange weather today. The morning was dark and cloudy. About half past ten o'clock there was a slight flimsy of rain then suddenly the wind changed from the southwest to the east, going round by way of the north, and for the rest of the day we had as hard an east wind as I think I have ever known here which has caused great loss in the orchards, blowing off millions of green apricots, prunes and peaches and other fruit. Have written to Theresa. (T.S.R. 57. 2 P.M. 72. S.S. 71.)

May 30. Monday. Sixty eight years ago on a Monday morning, my eyes first saw the light. And after all the many sicknesses and the almost constant invalidism, I am still here to record the loving kindnesses of the Lord. I can still read, write and sew a little each day, have many natural eyes, hair and teeth with no help from artificials. But I am greatly troubled with asthma this season, and am perfectly sensible that I have failed considerably during the year past. But if I could feel that I have done my work well, I should be satisfied. As it is, I fear my work has been almost a failure as far as permanent good is concerned. There are my four boys here still all of them out of the church and seemingly very indifferent as to the things of the kingdom. Must I go and leave the so? Dear Lord, help me and them. Hannah gathered flowers and Howard and Lottie decorated our graves. I have received six birthday gifts. From Alma Cooke a pretty little doily wrought with a violet pattern in silk, three bureau mats from Hannah, while linen centers with wide crocheted edges, a book (Cap'n Eri) from Ada, a pair of linen towels from Alice, salt and pepper shakers from Theresa, very cute and pretty, and $5. from Calvin. So I have been well remembered. Received letters from Calvin and Theresa and wrote to the Cookes. Theresa still on Pine St. with the sick babe, which does not seem to be recovering. And she is very weary. (T.S.R. 50. 2 P.M. 77. S.S. 62.)

June 1. Wednesday. Weather still partly cloudy. Have written to Theresa. Mrs. Allen called this forenoon. I am keeping the church Treasurer's Book for her because she has been to Byron Springs and is intending soon to go to Oakland for the summer. (T.S.R. 50. 2 P.M. 77. S.S. 67.)

June 3. Friday. Our school closed today, examinations included, but I have not at present a list of the promotions and graduates. The north wind blows a gale and much unripe fruit is being blown from the trees, which will cause great loss. (T.S.R. 55. 2 P.M. 85. S.S. 80.)

June 4. Saturday. We learn of the death of Samuel Baird, so soon after the death of his wife Ellen. He had pneumonia and a leg was