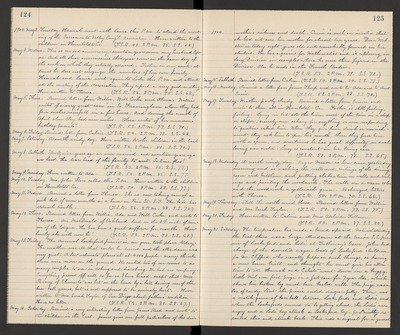 May 4. Wednes. This is our sad anniversary, seventeen years since my husband left us. And all these anniversaries this year come on the same day of the week on which they actually occurred. Father is very weak at times he does not recognize the members of his own family. Hannah and Laura went again to Lodi this P.M. and attended the meeting of the Association. They report a very good meeting. Have written to Theresa. (T.S.R. 52. 2 P.M. 75. S.S. 68.)

May 5. Thurs. Received letters from Willie, Will Cooke and Alma. Willie writes of a "very great rain" in So. Framingham when they had five inches rainfall in a few hours. And during the month of April alone they had nine inches. Alma writes of her numerous birthday presents. (T.S.R. 52. 2 P.M. 77. S.S. 70.)

May 13. Friday. The Annual Lockeford picnic in our grove took place today. The weather was all that could be desired and the attendance was very great. A low estimate places it at 4000 people, many think there were more on the ground. He rented two of our rooms to as many couples to use in robing and disrobing. We had no company. Everything passed off well so far as I have heard, except that Mrs. Reiney of Clements was hit on the head by a ball during one of the base-ball games, but is not supposed to be seriously hurt. Have written to Mrs. Sarah Taylor of San Diego about father's condition. He is no better. (T.S.R. 52. 2 P.M. 80. S.S. 67.)

May 14. Saturday. Received a very interesting letter from James Reed and wrote to the children in the East. James gives me full particulars of his dear

1904. mother's sickness and death. Carrie is such an invalid that she had not seen her mother for almost two years. Dean Webster is today eight years old and remarkably forward in his studies. He has a genius for Mathematics and is ciphering in Long Division in examples where he uses three figures in the Divisor. Also he reads in the Fourth Reader. (T.S.R. 52. 2 P.M. 79. S.S. 72.)

May 17. Tuesday. Weather partly cloudy. Received a letter from Eunice and wrote to them all in Humboldt Co. Father is still failing, failing. Lying in bed all the time, most of the time in a sleep or stupor, scarcely ever asking for anything or even responding to questions asked him. When they give him drink or nourishment, they ask him to open his mouth, their they feed him with a spoon, and sometimes he has great difficulty in swallowing even water. Lucy is constant in her loving care. (T.S.R. 50. 2 P.M. 50. 2 P.M. 78. S.S. 65.)

May 18. Wednesday. A north windy day. Negro Mason is here since yesterday morning and is washing the walls and ceilings of the dining room and kitchen, and putting alabastine on walls and ceilings and painting the wood work. The walls are a cream color and the wood work a yellowish green. Exchanged letters with Theresa. (T.S.R 50. 2 P.M. 70. S.S. 66.)

May 21. Saturday. The temperature has made a bound upward. Notwithstanding the heat, there was a large attendance at the Union S.S. picnic of Lockeford and Lodi at Tutheway's Grove. John had charge of the decorated wagon loads of Lockeford children, for Mr. Clifford, who usually helps in such things, is having a new house built, and thought he must give his attention to it. Hannah and Celeste went down in a buggy. Little Niel won first prize in a foot race for 7 years old, which shows his broken leg must have healed well. The prize was a box of candy. But the picnic ended disgracefully. There was a match game of baseball between Lockeford and Lodi's and when the Lockefords seemed to be getting ahead, the Lodi's were angry and a Lodi boy struck a Lockeford boy. Jo Priestley resented this and struck back. This was a signal for a general