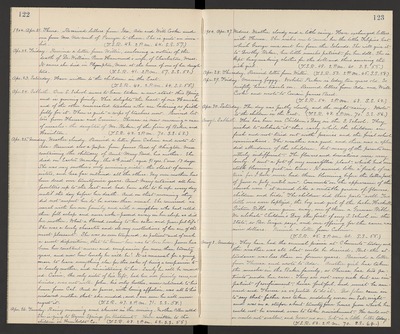 Apr. 24. Sabbath. Our S. School seems to have taken a new start this Spring and is growing finely. This delights the heart of our Hannah and of the other consecrated teachers who are laboring so faithfully for it. There is quite a corps of teachers now. Received letters from Theresa and Eunice. Theresa is now nursing a case of measles - the daughter of Mr. Baker of the firm of Baker and Hamilton. (T.S.R. 42. 2 P.M. 70. S.S. 63.)

Apr. 25. Monday. Weather cloudy. Received a letter from Calvin and wrote to Ada. Received also a paper from James Reed of Abington, Mass. containing the obituary of Aunt Mary Reed, his mother. She died on Easter Monday, the 4th inst. aged 91 yrs. 5 mos. 13 days. She was my mother's only surviving sister, the oldest of seven sisters, and has far outlived all the others. My own mother has been dead over twenty nine years. Aunt Mary retained all her faculties up to the last and had been able to be up every day until the day before her death. And on that morning they did not suspect her to be worse than usual. She conversed as usual with her own family and with a neighbor who had called then fell asleep and never woke - passed away in her sleep as did her mother. What a blessed ending to her calm and peaceful life! She was a lovely character and all my recollections of her are of the most pleasant. She was so even tempered, so patient and of such a sweet disposition, that to know her was to love her. James has been her constant nurse and companion for more than twenty years, and now how lonely he will be! It is unusual for a young man to leave everything else for the sake of being a companion to a lonely mother, and ministering to her. Surely he will be rewarded. Carrie, the only sister of his left, had her own family cares, and besides, was not well. John, his only brother, never returned to his home from Cal. and so James, with loving affection, was all to his widowed mother that she needed, and I am sure he will never regret it. (T.S.R. 47. 2 P.M. 71. S.S. 58.)

1904. Apr. 27. Wednes. Weather cloudy and a little rainy. Have exchanged letters with Theresa. She wishes me to send her the little Filipino hat which George once sent her from the Islands. She will give it to Dorothy Baker, her little measles patient, for her doll. She is kept busy making clothes for the doll and thus amusing the sick girl. (T.S.R. 48. 2 P.M. 60. S.S. 55.)

May 1. Sabbath. This has been our Children's Day in the S. school. They wished to celebrate it thus early while the children are fresh and not tired out with picnics and the final school examinations. The weather was good and there was a splendid attendance of the children, but many of the parents seem utterly indifferent. The flowers and decorations were very lovely. I sent a pot of my amaryllis plant, which had one stalk blooming just in time. It seemed like a "freak of nature" for I have never had them blooming before the latter part of June or July until now. Comments on the appearance of the church were, "it seemed like a veritable garden of flowers, children and birds." The children did their parts well. Two little ones were baptized, the boy and girl of the barber Haskell. Sixteen Bibles were given away, one of them a German Bible. We celebrate Children's Day the first of any S. school in the State, so Rev. Singer says, and our offering for the cause was nine dollars. Received a letter from Calvin. (T.S.R. 45. 2 P.M. 60. S.S. 55.)

May 2. Monday. They have had the annual picnic at Clements today and the weather was all that could be desired. But the attendance was less than in former years. Received a letter from Theresa and wrote to Ada. Another girl has taken the measles in the Baker family, so Theresa has two patients under her care. They are not very sick but are impatient of confinement, hence feetful, and must be amused and Theresa is expected to do it. Bro. John came in to say that father was taken suddenly worse on Sat. night and was in a stupor about twenty four hours from which he could not be aroused even to take nourishment. He could not or would not swallow, and knew no one, but is a little better today. (T.S.R. 52. 2 P.M. 70. S.S. 64.)