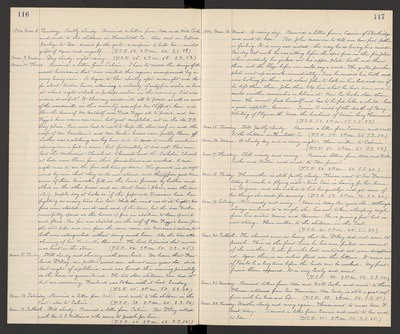 Mar. 10. Thurs. Received a letter from Calvin. I have to record the doings of the worst hurricane that ever visited this region, accompanied by a very heavy rain. It began to blow shortly after midnight and blew for about twelve hours, attaining a velocity of sixty five miles an hour at about eight o'clock or perhaps earlier in the morning. O it was indeed dreadful! It blew my windmill all to pieces, as well as most of the windmills in this vicinity, unroofed Mr. Clifford's barn and blew the barns of Mr. Metcalf and Fred Figge all to pieces, and Mr. Figge's barn was a new one, but just completed, out on the old T.B. Day place. Our men had to work to keep the store roof on and the roofs of Mr. Garretson's and Mrs. Grub's houses were partly blown off. Luther was watching our big barn and he said it would sometimes spring over a foot or more, but fortunately it did not blow over. But the Methodist Church at Clements and the Catholic Church at Lodi were blown from their foundations and wrecked. A sad sight was to see the fine oak trees go down. The ground is so softened by rain that they could not stand, and thirty five good trees, some of them live oaks, fell on the land farmed by Luther and others on the other pieces, and on Aunt Susie's place, near the cemetery, people say it looks as if the Japs and Russians had been fighting, so many trees lie low. While the wind was at its height, two fires were started, one at each end of the town, but the dear Father mercifully spared us the horrors of fire in addition to those of wind and flood. One fire was started in the roof of Mr. Figge's house from the stove pipe and one from the same cause in Marceau's saloon, but both were extinguished without doing much harm. Also the terra cotta chimney of Geo. Hartwell's blew over. The Lord be praised that no one was hurt in the storm. (T.S.R. 46. 2 P.M. 50. S.S. 45.)

Mar. 11. Friday. Still cloudy and showery with some hail. We learn that Freeland DeKay, our pastor's second son, almost nine years old, died last night of diphtheria, and was buried this morning privately, as the house is quarantined. The two older children have had it but are recovering. Freeland was taken with it last Sunday. (T.S.R. 45. 2 P.M. 50. S.S. 48.)

1904. Mar. 14. Mond. A rainy day. Received a letter from Eunice of Sturbridge and wrote to Ada. Bro. John came in to tell me how fast father is failing. It is very sad indeed - the way he is losing his mind. One day last week he was sitting before the open fire in the fire place when suddenly he jerked out his upper plate teeth and threw them into the blaze before one could say a word. The gutta percha plate went up in smoke immediately. Soon he missed his teeth and was looking for them and asked John to look in his bed and see if he left them there. John then told him what he had done, and he could neither remember or believe it. Now he looks older than ever. He cannot feed himself and has to be fed like a child - has a good appetite, however. Eunice C. writes of the death of Benj. Whiting of Plymouth, Mass. the husband of Cousin Lucy Hammond. (T.S.R. 52. 2 P.M. 57. S.S. 57.)

Mar. 18. Friday. The weather is still partly cloudy. Theresa went to San Francisco today to make a flying visit. Miss Cain is leaving for her home in Arizona, and she wished to bid her goodbye and get some of her things she needs for nursing. (T.S.R. 57. 2 P.M. 70. S.S. 60.)

Mar. 19. Saturday. Still windy and rainy. Edna is today ten years old. Although always inclined to a cough, she has not taken whooping cough from her sisters Marie and Bernice. She is growing fast but is not strong. Have written to the children in the East. (T.S.R. 60. 2 P.M. 64. S.S. 60.)

Mar. 20. Sabbath. The showers were so heavy that Mr. DeKay did not come to preach. This is the first time he has ever failed on account of the weather. So the few who had ventured out were disappointed. Again there is an entire flood over the bottoms. It seems as if it would be a long time before the lands can be worked. My first freesia bloom appeared. It is very lovely and sweet. (T.S.R. 40. 2 P.M. 43. S.S. 40.)