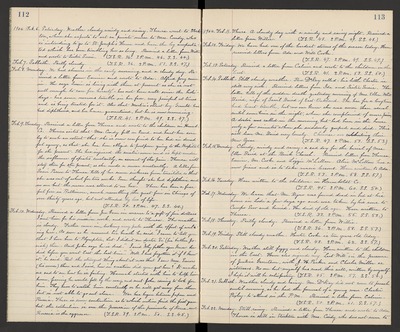 1904. Feb. 6. Saturday. Weather cloudy, windy and rainy. Theresa went to Stockton, where the expects to act as private nurse to Mrs. Condy, who is intending to go to St. Joseph's Home and have the leg amputated which has been troubling her so long. Received a letter from Willie and wrote to Sister Susie. (T.S.R. 36. 2 P.M. 46. S.S. 44.)

Feb. 8. Monday. We had showers in the early morning, and a cloudy day. Received a letter from Eunice and wrote to Ada. Alfred Jory came in. He says Susie is living with them at present as she is not well enough to care for herself - has not been well since the holidays - has some nervous trouble in her face, very painful at times and is being treated for it. Also that Mertice's oldest boy Gerould - has had diphtheria, and her house quarantined, but he is now recovering. (T.S.R. 41. 2 P.M. 49. S.S. 47.)

Feb. 9. Tuesday. Received a letter from Theresa and wrote to the children in Humb. Co. Theresa writes that Mrs. Condy fell on Sund. and hurt her sore leg to such an extent that she is now confined to her bed in dreadful agony, so that she has been obliged to postpone going to the Hospital for the present. She has injured the sciatic nerve and is kept under the influence of opiates constantly, on account of the pain. Theresa will stay there for the present, as she needs a nurse constantly. A letter from Susie Pascoe to Theresa tells of her severe sickness from tonsilitis, so that she was cut of school for two weeks. Some thought she had diphtheria, and no one but the nurse was allowed to see her. There has been a fearful fire in Baltimore, much resembling the great fire in Chicago of over thirty years ago, but not attended by loss of life. (T.S.R. 30. 2 P.M. 47. S.S. 44.)

Feb. 10. Wednesday. Received a letter from Jee Gam in answer a gift of five dollars I sent him for his mission work, and wrote to Theresa. The weather is cloudy. Father came in, looking very pale with the effort of walking here. As soon as he recovered his breath he said "I came to tell you that I have been to Plympton, but I didn't see doctor Si (his brother Josiah) there. And John says he is dead." I said "Why father you know he died before you went East the last time." Well I had forgotten it if I knew it", he said. "But the strangest thing about it was that I saw Mrs. Somers (his nurse) there and I said, how in creation did you get there?" It makes us sad to see how he is failing. Hannah started with him to help him home, fearing he would fall by the way, and met John coming to look for him. They have to watch him constantly or he will get away from them but is not able to go out alone. War has begun between Japan and Russia. There is some contention as to which nation fired the first gun, but the contention is over the possession of the peninsula of Korea, and Russia is the aggressor. (T.S.R. 39. 2 P.M. 50. S.S. 45.)

Feb. 14. Sabbath. Still cloudy weather. Rev. DeKay called - his little Chester is still very sick. Received letters from Ida and sister Susie. The latter tells of the sudden death yesterday morning of Mrs. Ellen White Baird, wife of Sam'l Baird of East Oakland. She has for a long time had heart trouble, but no one knew she was worse than usual until some time in the night, when she complained of severe pain. A doctor was called in the morning but had been in the house only a few minutes when she suddenly gasped and died. This will leave Mr. Baird very lonely. Chinese are celebrating their New Year. (T.S.R. 47. 2 P.M. 53. S.S. 53.)

Feb. 20. Saturday. weather still foggy and cloudy. Have written to the children in the East. Have also signed my "Last Will" in the presence of Justice Garretson, with J.H. Parker and Charles Miller as witnesses. No one but myself has read this will, written by myself. I hope it will be satisfactory. (T.S.R. 45. 2 P.M. 57. S.S. 54.)

Feb. 22. Monday. Still rainy. Received a letter from Theresa and wrote to Ada. Theresa is still in Stockton with Mrs. Condy, who does not seem to