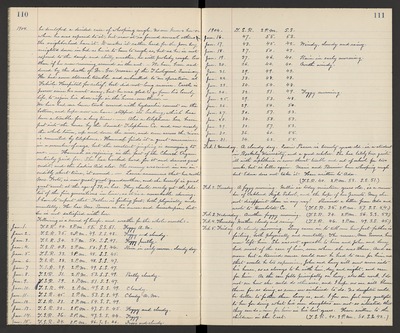 1904. he developed a decided case of whooping cough. No one knows how or when he was exposed to it, but now it is found several others in the neighborhood have it. It makes it rather hard for the poor boy weighted down in bed as he is to have to cough so, but as he is not exposed to the damp and chilly weather, he will probably cough less than if he were running around in the wet. We have been saddened by the death of Dr. Geo. Mooar of the Theological Seminary. He had some stomach trouble and submitted to an operation at Fabiola Hospital for relief, but did not long survive. Earth is poorer since he went away, but he was glad to go from his lonely life, to rejoin his dear wife in the "home over there."_ We have had our lower tank covered with hydraulic cement on the bottom, and hope now we have stopped its leaking, which has been a trouble for a long time._ Also a telephone has been put into the house by the sunset Telephone Co. and now nearly the whole town, up and down the river, and even across the river is connected by telephone. Hannah finds it a great convenience in a number of ways, but the constant jingling is annoying to me._ Hannah is rejoicing in the fact of the Church Organ entirely paid for. She has worked hard for it and deserves great credit, and the Ladies Aid also. The money was raised in an incredibly short time, it seemed._ Laura announces that her mother Mrs. Foote, is now great, great grandmother, and she herself is great, great aUnt, at the age of 38, or less. They should surely get the photos of the five generations in line, as it is a remarkable showing. I have to report that Father is failing fast, bith physically and mentally. He has Mrs. Somers as his nurse and housekeeper, but he is not satisfied with her.

Feb. 1. Monday. A cloudy day. Susie Pascoe is twenty years old - is a student in Berkeley University, and a good scholar. She has lately been quite ill with diphtheria or some throat trouble and out of school for two weeks, but is better again. Marie and Bernice have whooping cough but Edna does not take it. Have written to Ada. (T.S.R. 40. 2 P.M. 53. S.S. 51.)

Feb. 2. Tuesday. A foggy morning. Nellie is today nineteen years old, is a member of Oakland High School, and the hope of her parents. May she not disappoint them in any way! Received a letter from Ada and wrote to Humboldt Co. (T.S.R. 35. 2 P.M. 57. S.S. 54.)

Feb. 5. Friday. A cloudy morning. Lucy came in to tell me how fast father is failing, both physically and mentally. The nurse, Mrs. Somers, has now left him. She was not agreeable to him and John and Lucy had most of the care of him, even when she was there. And as none but a trained nurse could now be had to care for him and that would be too expensive, John and Lucy will now move into his house, so as always to be with him, day and night, and care for him. As the care falls principally on Lucy, also the work, I do not see how she could do otherwise, and I hope no one will blame them for so doing, as same are inclined to do. No daughter could be better to father than Lucy is, and I for one feel very grateful to her for doing what his own daughters are not so situated that they can do care for him in his last years. Have written to the children in the East. (T.S.R. 40. 2 P.M. 50. S.S. 42.)