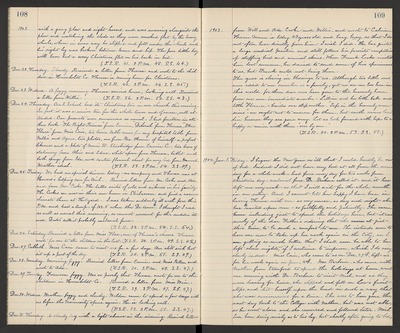 1903. with a gang plow and eight horses, and was running alongside the plow and watching the clods as they were mashed flat by the heavy wheels, when in some way he slipped and fell under the wheels and his right leg was broken between knee and hip. The poor little boy will have but a sorry Christmas, flat on his back in bed. (T.S.R. 41. 2 P.M. 48. S.S. 46.)

Dec. 24. Thursday. Our S. School had its Christmas tree in our church this evening. In fact it was a union tree for the whole town and of course, well attended. Our presents were numerous as usual. I had fourteen in all - three books - "The Right Princess" from Eunice, "Deborah' from Theresa, "Blue Flower" from Miss Cain, two linen table-covers for any hospital table from Nellie and Agnes, two photos, one from Bro. Horace of himself - a perfect likeness and a photo of Main St. Sturbridge from Eunice C. - two boxes of stationary from Alice and Edna, white apron from Theresa, tablet and bath sponge from Ida, and canton flannel sheet for any bed from Hannah. Weather ideal. (T.S.R. 33. 2 P.M. 54. S.S. 49.)

Dec. 25. Friday. We had no special dinner today - no company and Theresa was at Howard's helping care for Neil. Received letters from Mr. Cooke and Ada and from Rev. Perks. The latter writes of cold and sickness in his family. The Cookes are now in their new home in Steilacoom and find a warmer climate than at Hillyard. I was taken suddenly ill with fever this P.M. and had a temp. of 102.5 when the Dr. came. I thought I was as well as usual this morning, so cannot account for the sudden illness. Doctor calls it probably malarial fever. (T.S.R. 32. 2 P.M. 54. S.S. 50.)

Dec. 31. Thursday. A cloudy day with a light shower in the morning. Received letters

1903. from Will and Ada Cooke and Willie, and wrote to Calvin Horace Mann is today 43 years old and busy, busy, so that I do not often hear directly from him. I wish I did. He has quite a large medical practice and still follows his favorite occupation of stuffing bird and animal skins. When Frank Locke visited him last summer, he desired to send some of his specimens to us, but Frank could not bring them. The year is closing in blessings to us. Although two little ones were added to our number as a family, yet we are one less here in this world, for three dear ones have gone to the heavenly home from our own immediate number - Lillian and her little babe and little Florence - besides our step mother. "Safe in the heavenly mansion" - we ought not to mourn for them, but earth seems lonelier because they are gone away. Let us look forward with hope to a happy re-union with them - "one by one." (T.S.R. 40. 2 P.M. 53. S.S. 51.)

1904. Jan. 1. Friday. I began the New Year so ill that I could hardly be out of bed. Indeed I did not leave my bed at all from the second day for a whole week - had fever every day for two weeks from Christmas day - malarial fever, Dr. Barbour called it - and it has left me very weak - so that I will write for the whole month in one entry. And I cannot tell how happy I have been in having Theresa with me as my nurse, as day and night she has waited upon me - so faithfully and patiently. She came home intending just to spend the holidays here, but it was surely of the dear Father's ordering that she came at just this time, to be such a comfort to me. She intends soon to leave me now to take up her work again in the City, as I am getting so much better that I shall soon be able to be left alone nights, if I continue to improve, which I do very slowly indeed. Miss Cain, who came to us on Dec. 27th, left us for her work again on Jan. 4th. Mrs. Barbour, who came with Nathan from Stanford to spend the holidays at home, went one evening with Dr. Barbour to visit Neil, and as they were leaving for home, she slipped and fell on Lou's front steps, and hit herself upon the head in such a way that she was unconscious for a time. She was to have gone the next day back to the College with Nathan, but was not able, so he went alone and she recovered and followed later. Neil has been doing nicely as to his leg, but shortly after going to bed,