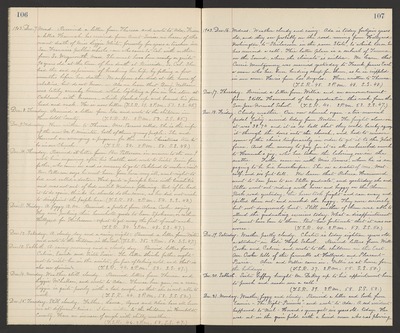 1903. Dec. 7. Mond. Received a letter from Theresa and wrote to Ada. From a letter Hannah has received from Aunt Susie we learn of the recent death of Miss Lizzie White, formerly for years a teacher in San Francisco public schools - one who came to Cal. with mother from So. Weymouth, Mass. She must have been nearly or quite 90 years old at the time of her death at Riverside, So. Cal. She had the sad experience of breaking her hip by falling a few months before her death. We suppose she died at the home of relatives, but do not know. Also we learn that Benj. Wallace was lately severely burned while lighting a fire in his stove at Oakland, with kerosene, which flashed up and burned his fair, head and neck. He is now better. (T.S.R. 29. 2 P.M. 53. S.S. 45.)

Dec. 10. Thursday. Received a letter from Rev. Patterson in answer to the one I wrote him inquiring after his health, and wrote to Sister Susie for father, who came in and is uneasy to go to Oakland to make a visit. Rev. Patterson says he went home from here very ill, went right to bed and called a doctor. Had quite a painful time with tonsilitis and was not out of bed until Wednes. following. But if he had it to do again, thinks he should do the same, as he did not wish to disappoint the people here. (T.S.R. 33. 2 P.M. 54. S.S. 48.)

Dec. 11. Friday. A foggy A.M. Received a postal from Alma Cooke saying they were packing their household goods to leave Spokane, or rather Hillyard for Steilacoom - expect to get away the first of next week. (T.S.R. 34. 2 P.M. 48. S.S. 47.)

Dec. 13. Sabbath. A rainy morning and a cloudy day. Received letters from Calvin, Eunice and Sister Susie. The latter thinks father ought not to visit her in the winter, for fear of taking cold, and that is also our opinion. (T.S.R. 44. 2 P.M. 52. S.S. 47.)

1903. Dec. 16. Wednes. Weather cloudy and rainy. Ada is today fortysix years old, and they are probably on the road moving from Hillyard Washington, to Steilacoom in the same State, to which town he has received a call. This letter place is a suburb of Tacoma on the Sound, where the climate is milder. We learn that Carrie Montgomery was married yesterday to Frank James Earl a man who has been herding sheep for them, as he is crippled in one arm. He is from Los Angeles. Have written to Theresa. (T.S.R. 45. 2 P.M. 48. S.S. 48.)

Dec. 18. Friday. Cloudy weather. Our new church organ - a two-manual pedal Estey - arrived today from Boston. The freight alone on it was $38.74 and it is so tall that they could barely squeeze it through the doors into the church, and had to remove some of the chairs temporarily in order to get it to the platform. And the money to pay for it is all subscribed much to Hannah's joy, who has taken the laboring oar in the matter. Father came in with Miss Somers, whom he is engaging to be his housekeeper. She is a sister of Mrs. Metcalf, and six feet tall. We learn that Rebecca Hammond went to San Jose to see Stella graduate, and yesterday she and Stella went out riding with horse and buggy on the Alum Rock road yesterday, the horse took fright and ran away and spilled them out and wrecked the buggy. They were seriously but not dangerously hurt. Still neither of them was able to attend the graduating exercises today. What a disappointment it must have been to them. But how fortunate that it was no worse. (T.S.R. 40. 2 P.M. 53. S.S. 50.)

Dec. 19. Saturday. Weather partly cloudy. Chester is today eighteen years old a student in Lodi High School. Received letters from Will Cooke and Calvin and wrote to the children in the East. Mr. Cooke tells of the farewells at Hillyard and Pleasant Prarie. Alice and Nellie came in. Nellie is at home for the holidays. (T.S.R. 37. 2 P.M. 55. S.S. 50.)

Dec. 21. Monday. Weather foggy and cloudy. Received a letter and book from Eunice - "The Right Princess" - and wrote to Ada. A sad accident happened to Neil - Howard's youngest - six years old - today. He was out in the grain field with a hired man who was plowing