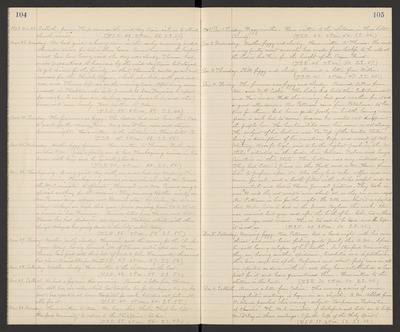 Nov. 23. Monday. We had quite a heavy rain in the early morning and a thunder storm for two or three hours. Somewhere near the tempest must have been heavy, and the day was cloudy. Theresa had made preparations to leave us by the mid-day train but stayed to get dinner for the family, so that Hannah could go out and canvass for the Church Organ, which she did, with good success, and Theresa left us on the evening train. after doing some errands in Stockton, she is to proceed to San Francisco to report for work. So we lose our darling again for a while, and the house will seem lonely. Have written to Ada. (T.S.R. 55. 2 P.M. 67. S.S. 60.)

Nov. 26. Thanksgiving. A very quiet day with us, as we had no company. There were union Thanksgiving services in our church with Mr. Parsons the M.E. minister, to officiate. Hannah and Mrs. Parsons sang a special anthem for the occasion. They can sing together nicely as Mrs. Parsons sings soprano and Hannah alto. No turkey for dinner today - turkeys are high this year - prices ranging from 22 to 35 ets. a pound in San Francisco. Received letters from Theresa and Willie Theresa has had epidemic sore eyes in Stockton which, with other things, delayed her going down to the City until today. (T.S.R. 46. 2 P.M. 58. S.S. 55.)

Nov. 27. Friday. Weather partly cloudy. Hannah sent the money for the Church Organ today, having borrowed $100. of Theresa until after our Fair. Theresa has just sold three lots of land to John Hammond - those next his place. Received letter from Ada. (T.S.R. 47. 2 P.M. 57. S.S. 53.)

Nov. 29. Sabbath. We had a fog-rain this morning. Received a letter from Theresa. She still has ear-ache which has troubled her for ten days or two weeks past has reported at Lane Hospital for work, but does not feel well able for it. (T.S.R. 44. 2 P.M. 60. S.S. 55.)

Dec. 4. Friday. The forenoon was foggy and cloudy. Received letters from Ada and Will Cooke. The Ladies Aid held their Entertainment and Fair in our Hall this evening, had good weather for it and a good attendance. Rev. Patterson came from Petaluma to lecture for them, but he is quite poorly in health, having risen from a sick bed to come, because he would not disappoint the people here. He has tonsilitis and his voice is not strong. The subject of his lecture was "On Top of the United States", being a description of his vacation trip and ascent of Mt. Whitney, 15,000 ft high, said to be the highest peak in the W. States, situated on the border line between Tulare and Inyo Counties in this State. The lecture was very interesting. They had Eddie's piano in the Hall and a Mr. Howe from Lodi to perform upon it. Also they had cake, coffee and ice cream for sale, and a booth filled with articles useful and ornamental, and Ladies Home Journal pictures. They took in over $80. and the net receipts were about $60. so they are encouraged Rev. Patterson is here for the night. He tells me that it is reported that Helen Goodsell died in the Insane Asylum this week. She was married last year and after the birth of her babe, two or three months ago, went insane. This is too sad to be tame and we hope it is not so. (T.S.R. 40. 2 P.M. 50. S.S. 45.)

Dec. 5. Saturday. Morning foggy. Rev. Patterson had a hard night with his sore throat and went home feeling quite poorly this A.M. I fear he will have a relapse of his trouble. In Stanford University they are having another epidemic, tonsilitis and diphtheria this time, and two of the Professors and about forty cases in all are reported as down with it, and they have established a hospital for it and have quarantined them. Have written to the children in the East. (T.S.R. 30. 2 P.M. 50. S.S. 46.)

Dec. 6. Sabbath. Received a letter from Calvin. This evening a series of union evangelistic meetings is begun in our church. A M. Abbott from Oakland preached this evening - subject "Temperance Federation of Churches." The M.E. ministers of Lockeford and Lodi are to help Mr. DeKay in these meetings. O for the help of the Holy Spirit! (T.S.R. 33. 2 P.M. 53. S.S. 48.)