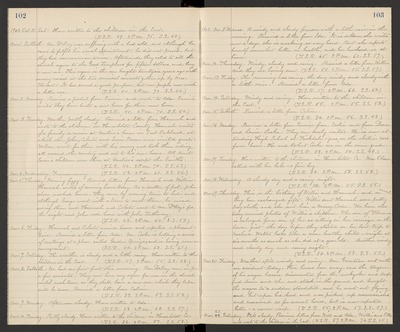 Nov. 1. Sabbath. Mr. DeKay was suffering with a bad cold, and although he came to fulfil his usual appointment, he did not preach, but they had communion service. Afterwards, they voted to sell the church organ to the Good Templars for fifteen dollars and buy a new one. This organ is the one bought twentysix years ago with money raised at the two musical concerts gotten up by Mrs. Stewart. It has served purpose, but our people now wish a better one. (T.S.R. 44. 2 P.M. 72. S.S. 64.)

Nov. 3. Tuesday. Weather partly cloudy. Received a letter from Hannah and wrote to the children in Humboldt County. Hannah writes of a family re-union at Mertice's house in East Oakland, at which she, John, Celeste and Susie Pascoe were invited guests. Wallace went for them with his survey and took them riding all around the country and out to his new home. All Aunt Susie's children were there at Mertice-s except the Smiths. (T.S.R. 42. 2 P.M. 70. S.S. 63.)

Nov. 5. Thursday. Morning foggy. Received letters from Hannah and Willie. Hannah writes of coming home today. As a matter of fact, John alone reached home. They came by evening train to Lodi and although George went with a team to meet them, he missed seeing them and Hannah and Celeste went to Mr. DeKay's for the night and John rode home with John Tretheway. (T.S.R. 43. 2 P.M. 64. S.S. 59.)

Nov. 6. Friday. Hannah and Celeste arrived home and reported a pleasant time. Received a letter from Ada. Mr. Cooke is holding a series of meetings at a place called Garden Springs, and is having some encouragement. (T.S.R. 40. 2 P.M. 68. S.S. 61.)

Nov. 16. Monday. Received a letter from Eunice from Scotia and from Dean and Louise Locke. They are lovely writers. He is now attending High School at Fiskdale - goes on the electric cars from home. He and Robert Cooke are in the same grade. (T.S.R. 33. 2 P.M. 54. S.S. 48.)

Nov. 19. Thursday. This is the birthday of Willie and Hannah, and, as usual they have exchanged gifts. Willie sent Hannah some pretty tray cloths and she sent him a Money Order. We have also today received photos of Willie-s children. The one of Florence is enlarged from one of her as sitting in her carriage on the lawn, just the day before they started on her last trip to Nashua. Walter looks like a more healthy child - weighs at six months as much as she did at a year old. Another windy and cloudy day and rainy night. (T.S.R. 50. 2 P.M. 58. S.S. 55.)

Nov. 20. Friday. Weather still windy and rainy. Mr. Garretson met with an accident today. His horses ran away, and the tongue of his wagon became disconnected from the neckyoke and dropped down and the end streak in the ground and bought the wagon to a sudden stand still, and he went out flying and hit upon his head and was picked up unconscious and remained so for several hours, but is now reported better - a narrow escape. (T.S.R. 55. 2 P.M. 57. S.S. 57.)