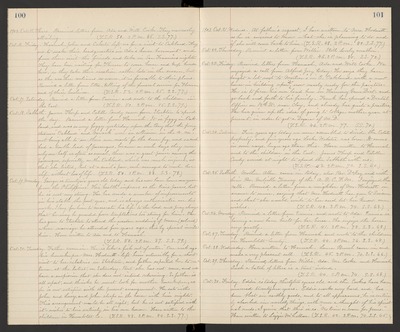 Oct. 16. Friday. Hannah, John and Celeste left us for a visit to Oakland. They are to make their headquarters in Ada's house basement and from there visit the friends and take in San Francisco sights. They have been waiting for Theresa to come home and keep house here, so they take their vacation rather late in the season, but as the weather continues so warm, it is favorable to their plans. Received a letter from Etta, telling of the funeral service for Florence and of their loneliness. (T.S.R. 52. 2 P.M. 85. S.S. 77.)

Oct. 18. Sabbath. James Thorp and Estelle Condy came from Stockton to spend the day. Received a letter from Hannah. It is foggy in Oakland, and was so very foggy yesterday upon the Bay that the ferry steamers "Oakland" and "Newark" were in collision in the A.M. not being able to see their own masts for the dense fog, and as each had a double load of passengers, because on such days they run only one-half as often as usual, there was a great panic among the passengers, especially on the Oakland, which was much injured, so that she listed, but at a snail's pace, each managed to reach her slip, without loss of life. (T.S.R. 50. 2 P.M. 88. S.S. 78.)

Oct. 19. Monday. George is twentysix years old today and has now been home one year from the Philippines. His health improves as the time passes, but he is not very strong. he has made a number of improvements in his stable the past year, and is always enthusiastic over his work. I long for him to consecrate his life to the Lord and pray always that he may be guarded from temptations too strong for him. He has gone to Stockton to attend the wooden wedding of Mason (colored) whose marriage he attended five years ago, this by special invitation. Have written to Ada and to Hannah. (T.S.R. 50. 2 P.M. 87. S.S. 79.)

Oct. 20. Tuesday. Father came in. He is "like a fish out of water." One week ago his housekeeper. Mrs. Hodnett - left - him ostensibly for a short visit to her relatives in Stockton, and father expected her to return, at the latest, on Saturday. But she has not come, and we have a suspicion that she does not intend returning. So father is all upset, and thinks he must look for another housekeeper, as he is not satisfied with the present arrangement. He eats with John and Lucy, and John sleeps in the house with him nights. This arrangement would be all right, but he is not satisfied with it - wishes to live entirely in his own house. Have written to the children in Humboldt Co. (T.S.R. 48. 2 P.M. 84. S.S. 77.)

Oct. 23. Friday. Received letters from Hannah, Ada and Will Cooke. We enjoyed a call from Alfred Jory today. He says they have bought a lot next to Mertice in E. Oakland with a new house in building upon it now nearly ready for the painters. He is to farm his own land here in Harmony Grove Dist. and go back and forth to his family. Frank has opened a Dental Office on 12th St. near Clay, and already has quite a practice. He has given up the idea of going to College another year at present, in order to get a Degree of M.D. (T.S.R. 46. 2 P.M. 77. S.S. 70.)

Oct. 24. Saturday. Five years ago today we were assembled to divide the Estate property, and five years ago Locke Webster was born. It seems in some ways, longer ago than this. Have written to Hannah and to the children in the East. James Thorp and Estelle Condy arrived at night to spend the Sabbath with us. (T.S.R. 43. 2 P.M. 74. S.S. 66.)

Oct. 25. Sabbath. Mother Allen came in today, also Rev. DeKay and with him Rev. Melville Tenney of the A.B.C.F.M. I enjoyed the calls. Received a letter from a neighbor of Mrs. Hodnett in answer to mine, saying that Mrs. Hodnett has gone to Suisun and that she would write to her and let her know our wishes. (T.S.R. 42. 2 P.M. 74. S.S. 68.)

Oct. 30. Friday. Eddie is today thirtytwo years old and the Cookes have been married twentyone years. Eddie works very hard and has been blest in earthly goods, and to all appearances, he is entirely absorbed in worldly things, with never a thought of his spiritual needs. I give that this is so. "No time or room for Jesus." Have written to Lizzie McLellan. (T.S.R. 42. 2 P.M. 74. S.S. 65.)