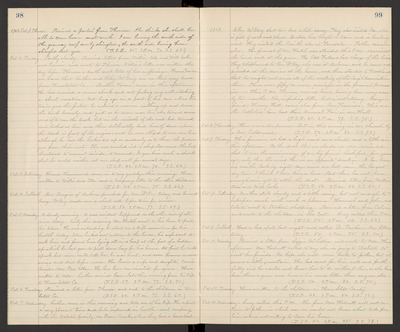 Oct. 2. Friday. Partly cloudy, Received letters from Willie, Ada and Will Cooke and Eunice and wrote to Theresa. Willie's letter was written the day before Florence's death and told of her sufferings. From Eunice we learn that Luther and Riley McGary are on their way home from Humboldt Co. Brother Horace came in this afternoon. He has received a severe shock and not feeling very well is taking a short vacation. Not long ago in a part of his run where his train goes the fastest, he noticed a woman walking up and down the track leisurely, and just as he came near her, she turned across or as if to cross the track, but in the middle of the road - bed turned and looked at him and then deliberately laid herself down upon the track in front of the engine, and he was obliged to run over her although he had the brakes set up so suddenly as to throw the passenger from their seats. She was crushed into a shapeless mass. She had threatened to commit suicide, it seemed. It gave him such a shock that he could neither eat nor sleep well for several days. (T.S.R. 42. 2 P.M. 70. S.S. 62.)

Oct. 5. Monday. A cloudy morning. A sad accident happened on the other side of the river today. Early this morning Mr. Hatch went to his barn to feed his team. He was intending to start on a trip somewhere for his health today. When he died not return to the house, his wife went to seek him and found him lying all in a heap at the fool of a ladder up which he had gone to pull down hay for his houses. At first he could speak but never could tell how he was hurt, and soon became unconscious and died before noon. He leaves a wife and daughter Carrie besides Mrs. Ora Allen. he has been an invalid for years. Have written to Ada. Luther arrived home late this evening from his trip to Humboldt Co. (T.S.R. 57. 2 P.M. 77. S.S. 71.)

Oct. 7. Wednesday. Luther came in this morning and told me of his trip. He reports a very pleasant time and feels improved in health went camping with the Webster family on Bear Creek, Where they have a homestead.

1903. Riley McGary shot two deer while away. They also visited Ida, who is full of work and plans. Benton has bought a team and is hauling wood. They visited the Smiths also at Ferndale. Father came in also. The funeral of Mr. Hatch was attended this P.M. - exercises at the house and at the grave. The Odd Fellows had charge of the buried. They telephoned to Rev. DeKay, who was at Auburn and he came and presided at the services at the house, and then started to Woodland that he might not miss all of the meeting of the Cong'l Association there. There were fifty or more carriages in the funeral procession. This P.M. Theresa arrived home, having been away nearly ten months. She is feeling better, but is not strong. George's friend, Harvey Hill, came also from San Francisco. This eve the Catholics have had their Annual Fair in our Hall. (T.S.R. 42. 2 P.M. 79. S.S. 75.)

Oct. 9. Friday. This forenoon we had a high wind and clouds and a little rain this afternoon. As the dust blew in clouds we were reminded that it was the anniversary of our big fire in Lockeford, four years ago, only then the wind blew in an opposite direction. It has been six months lacking eight days since our last rain, the longest dry time. I think I have known here. But there has not been enough rain yet to settle the dust. Received letters from Willie Ada and Will Cooke. (T.S.R. 50. 2 P.M. 64. S.S. 62.)

Oct. 10. Saturday. Weather still cloudy and a little rainy, but not enough to interfere much with work or pleasure. Hannah and John and Celeste went to Stockton shopping. Received a letter from Calvin and wrote to the children in the East. Lucy called this P.M. (T.S.R. 55. 2 P.M. 64. S.S. 63.)

Oct. 12. Monday. Received a letter from Lizzie McLellan and wrote to Ada. This afternoon Mrs. Hodnett called to say she is going to Stockton to visit her friends. We hope she will come back to father, but it seems a little uncertain. She has cared for him well and faithfully and he would not know how to do without her, as she has been there a year and knows his needs better than anyone else. (T.S.R. 50. 2 P.M. 82. S.S. 75.)