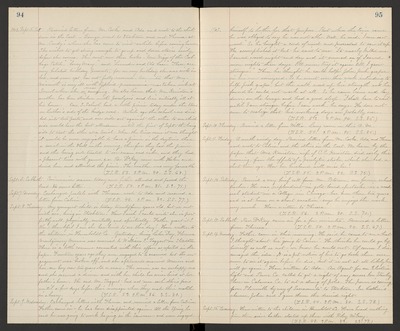 1903. Sept. 5. Sat. Received letters from Mr. Cooke and Ada and wrote to the children in the East. George Went to Stockton and not Theresa at Mrs. Candy's where she has come to visit awhile before coming home. She wishes to get strong enough to go up and down stairs easily before she comes. She sent me three books. "Mrs. Wiggs of the Cabbage Patch", "Lovely Mary", and "Lavender and Old Lace". These are my belated birthday presents, for on my birthday she was sick in bed, and even yet has not fully recovered, Ada writes that Mrs. Naismith is very ill with typhoid pneumonia was taken sick at Sunol Where she is or was camping. We also learn that Mr. Keniston's mother has been stricken with paralysis and his critically ill at his home. Our S. School had a little picnic today under the trees on Luther's side of the bridge road. A while ago the school was divided into two parts, and one side set against the other to see which side would have the best attendance until the first of Sept. the losing side to treat the other at a Social. When the time came it was thought it would be more enjoyable to have a picnic in the daytime than a social in the Hall in the evening, therefore they had the picnic and the losing side treated to ice cream and cake, and they had a pleasant time with games, x.c. Rev. DeKay came with Helen and dined here and attended the picnic. The weather was very favorable. (T.S.R. 53. 2 P.M. 80. S.S. 68.)

Sept. 8. Tuesday, My youngest child is today twenty four years old, but is not with me, being in Stockton. How I wish I could write she is perfectly well, physically, mentally, and spiritually. Father grant it! How thankful I am she has lived to see this day! Have written to the children in Humboldt Co. Yesterday being Labor Day, Florence Montgomery Merwin was married to William E. Taggart in Stockton. There is a little romance connected with this affair as reported in the paper. Fourteen years ago they were engaged to be married but the engagement was broken off, and she afterwards married Merwin and has one boy now ten years old or more. The union was an unhappy one and she secured a divorce and with her child has since lived at her father's house. She and Mr. Taggart had not seen each other's faces until a few days before their marriage when they made their match in a hurry. (T.S.R. 53. 2 P.M. 86. S.S. 80.)

Sept. 9. Wednesday. Exchanged letters with Theresa and received a letter from Calvin Father came in he has been disappointed again. All the Spring he said he was going to work hazing in the Summer and even engaged.

1903. himself to Luther for that purpose. But when the time came he was obliged to say he was not able. Well, he said, "I can saw wood." So he bought a cord of wood and proceeded to saw it up He accomplished it but he said to me "It nearly killed me. I sawed wood night and day and it seemed as if I sawed more nights than days, I'll never try it again till I grow stronger," Then he thought he could help John pick grapes in his new vineyard. so he went over this week intending to help pick grapes, but the walk used up his strength and he found he could not work at all. So he came home and lay down on the lounge and had a good sleep. "I shall have to wait until I am stronger before I can work", he says. He does not seem to realized that his working days are probably over. (T.S.R. 52. 2 P.M. 94. S.S. 85.)

Sept. 11. Friday. A north windy day. Received letters from Mr. Cooke, Ada and Theresa and wrote to Calvin and the others in the East. We learn by the paper that Mrs. Keniston, wife of C.C. Keniston died early this morning, from the effects of a paralytic stroke, which she had a short time ago, How her husband will miss her! (T.S.R. 55. 2 P.M. 82. S.S. 75.)

Sept. 12. Saturday. Received a very brief call from Mr. Peterson, our former school teacher. He was resplendent in gold - bowed spectacles - is a medical student in a College in Chicago has been there two years and is at home on a short vacation says he enjoys the work very much. Have written to Theresa. (T.S.R. 56. 2 P.M. 80. S.S. 70.)

Sept. 14. Monday. Father came in this morning. He said he came to see what I thought about his "going to Carver". He thinks he could go by himself as well as not we know he could not. Of course I discouraged the idea. It is a put motion of his to go back there once more to see it again before he dies, but it is not at all likely he will go again. Have written to Ada. An Agent for an Electric Light and Power Co. called to get a right of way across her Stanley Place in Calaveras Co. to set a string of poles. The power is coming from Placeville by way of Sacramento to Stockton. In Luther's absence, John and I gave them the desired right. (T.S.R. 44. 2 P.M. 80. S.S. 73.)