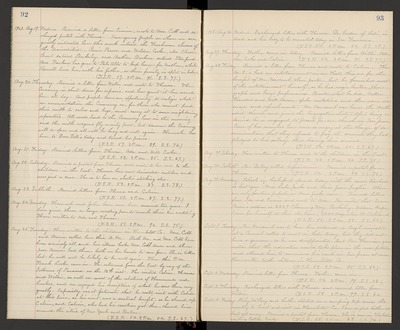 1903. Aug. 19. Wednes. Received a letter from Eunice, wrote to Mrs. Cobb and exchanged postals with Theresa. Four young people in whom we are greatly interested have this week entered the Freshman classes of the Universities: Susie Pascoe and Weldon Cooke, also Clarence Grant entered Berkeley, and Nathan Barbour entered Stanford. Mrs. Barbour has gone to Palo Alto to keep house for Nathan, while Roswell lives here with his father, so their family is split in halves. (T.S.R. 57. 2 P.M. 91. S.S. 77.)

Aug. 20. Thursday. Received a letter from Willie and wrote to Theresa. The Creamery is shut down for repairs, and how quite it has seemed here all day. And people have an opportunity to realize what an accomodation the Creamery is, for those who cannot feed their milk to calves and hogs, must carry it to some neighboring separators. All roads lead to the Creamery here in the morning and the milk wagons fly merrily past, but tomorrow the Creamery will re-open, and all will be busy and well again. Hannah has been to Dora Dill's today and tuned her piano. (T.S.R. 57. 2 P.M. 89. S.S. 74.)

Aug. 25. Tuesday. Have written to the children in Humboldt Co. Mrs. Cobb and Annie called here this A.M. Both Mr. and Mrs. Cobb have been seriously ill, and his illness broke Mrs. Cobb down and then poor Annie had them both on her hands to care for. She is better but he will not be likely to be well again. Then this P.M. Frank Locke came in. He returned from the East by way of the Isthmus of Panama on the 12th inst. He visited Calvin, Horace and Willie, as well as most of the relatives of Hammonds and Lockes, and we enjoyed his descriptions of what he saw there very greatly. Especially was it fortunate that he could visit with Calvin at this time, as his visit was a mutual benefit, as he cheered up Calvin, and Calvin, who had his vacation just them, showed him around the cities of New York and Boston. (T.S.R. 50. 2 P.M. 84. S.S. 67.)

Aug. 28. Friday. Received a letter from Theresa and wrote to Calvin. The M.E.'s had an entertainment in our Hall this eve for the benefit of Mr. Newcomb, their pastor, but he furnished most of the entertainment himself, as he had magic lantern, phonograph and banjo performances. Besides what he did, Nellie Flanders and Will Moore spoke recetations, and there were ice cream and refreshments. Mr. Newcomb now leaves the Methodist church and joins the Congregationalists. After being ordained he is engaged to preach for our church in San Juan. Some of his members here were so angry at the change of demominations that they refused to pay the amounts they had pledged to his salary, thus leaving him minus. (T.S.R. 50. 2 P.M. 85. S.S. 67.)

Sept. 1. Tuesday. Rev. Newcomb was to have been ordained a Cong'l minister at a Council called to meet in Lodi today, but they did not have a quorum, so he was disappointed. But Rev. Harrison gave notice that the ordination would take place in the near future and allowed him to commence his work in San Juan at once. Have written to the children in Humbodlt Co. (T.S.R. 53. 2 P.M. 95. S.S. 83.)

Sept. 4. Friday. Riley McGary and Luther started on a camping trip across the country to hunt and visit in Humboldt Co. I am so glad Luther at last got away. Received a postal from Theresa. She is now in Stockton visiting Estella Condy. (T.S.R. 55. 2 P.M. 89. S.S. 76.)