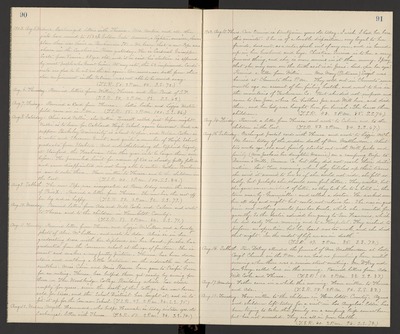 1903. Aug. 5. Wednes. Exchanged letters with Theresa. Mrs. Norton and all the girls have moved to 150 2 1/2 Golden Gate Avenue, a lighter, sunnier, cleaner place than was theirs on Buchanan St. - We learn that a new Pope was chosen n the Conclave in Rome yesterday. He is Cardinal Guiseppe Sarto, from Venice, 68. yrs. old, and it is said his election is approved by most people who know him. At any rate, the 62 imprisoned Cardinals are glad to be out in the air again. One seems near death from the close confinement in the Vatican - was not able to be moved away. (T.S.R. 50. 2 P.M. 84. S.S. 72.)

Aug. 8. Saturday. Alice and Nellie, also Nettie Truscott called just before night. Nellie is to leave for Oakland High School again tomorrow. And we suppose Berkeley University is about to open, and Weldon Cooke is to enter and Clarence Grant, and quite a number of High School graduates from Stockton. And notwithstanding the typhoid tragedy at Stanford, the Freshman Class this year is to be larger than ever before. The proscribed limit for women of 500 is already fully filled and some disappointed in not being able to enter. Nathan Barbour is now to enter there. Have written to Theresa and to the children in the East. (T.S.R. 60. 2 P.M. 100. S.S. 82.)

Aug. 11. Tuesday. Received letter from Theresa and Lizzie McLellan and a lovely photo of Alice McLellan, and wrote to Ada. Alice is in her graduating dress with her diploma in her hand, for she has graduated from the Common school at the age of fourteen. She is smart and makes a very pretty picture. Theresa has been down stairs and walking a little distance on the sidewalk on her crutches. Miss Cain and Miss Brown have gone to Pacific Grove for an outing. Theresa has helped them get ready by sewing for them. - The Woodbridge College Building which has stood empty for years, since the death of the College, has now been sold for taxes, and the School District has bought it, and is to fit it up for the Common School. (T.S.R. 47. 2 P.M. 84. S.S. 75.)

1903. Aug. 13. Thurs. Our Eunice is twenty nine years old today. I wish I had her here this minute. She is of a lovable disposition, very loyal to her friend, does not, as a rule, speak evil of any one, and is bound up in her husband and boys. Christian Science is to her a very precious thing, and she is more serious in it than many. I pray that she may soon see "the truth as it is in Jesus". Lord, open her eyes! Received a letter from Willie. Mrs. Mary (Putnam) Siegel was buried at Clements this P.M. They sold out in Clements some months ago on account of her failing health, and went to live in the mountains of Tuolumne Co. But she did not improve and came to San Jose, where her brothers Joe and Will live, and died there, and her body was brought here for burial. She leaves three children. (T.S.R. 48. 2 P.M. 85. S.S. 74.)

Aug. 15. Saturday. Exchanged postal cards with Theresa and wrote to Lizzie McL. We learn today of the sudden death of Mrs. Matthewson. About two weeks ago, she and family started out with Will Jacks and family (Mrs. Jacks is her daughter Mamie) on a camping trip to Duncan's Mills, Sonoma co. but they did not reach their destination. Last Tues. morning, when they hitched up their teams she said it seemed to her as if she could not ride, she felt so badly, but perhaps she should soon fell better. They waited, but she grew worse instead of better, so they took her to a hotel in the town nearby. Greeneville - and called a doctor. He worked over her all day and night but could not relieve her. She was in great pain and nothing would pass her bowels, while she vomited frequently. So the doctor advised her going to San Francisco, which she did early Thurs, morning and to a Hospital. They wished to perform an operation, but her heart was too weak, and she died that night. "In the midst of life we are in death." (T.S.R. 47. 2 P.M. 85. S.S. 73.)

Aug. 16. Sabbath. Rev. DeKay attended the funeral of Mrs. Matthewson at Lodi Cong'l Church in the P.M. so we had no preaching here until evening, when there was a union street meeting. Mr. DeKay and son George called her in the evening. Received letters from Ada. Will Cooke and Theresa. (T.S.R. 50. 2 P.M. 88. S.S. 83.)

Aug. 18. Tuesday. Have written to the children in Humboldt county. Agnes and children left today for a visit in Los Angeles. Eddie has been trying to take the family on a camping trip somewhere but has not succeeded. They are all in poor health. (T.S.R. 60. 2 P.M. 96. S.S. 78.)