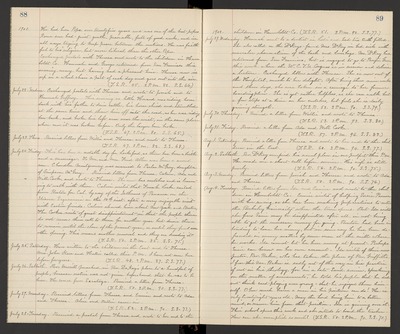 1903. He had been Pope over twenty five years and was one of the best popes Rome ever had - quite, gentle, peaceable, full of good works, and in all ways trying to keep peace between the nations. He was faithful to his religion, but more liberal than the other Popes. Exchanged postals with Theresa and wrote to the children in Humboldt Co. Hannah and George returned from San Francisco this evening, weary, but having had a pleasant time. Theresa now is up in a wheel chair a part of each day and goes out into the air. (T.S.R. 45. 2 P.M. 82. S.S. 66.)

July 22. Wednes. Exchanged postals with Theresa and wrote to Josiah and to Hannah Geffroy. This evening as little Howard was riding horseback with his father to drive cattle, his horse shied and stumbled at the same time and threw him off into the road, as he was riding bare-back, and broke his left arm near the wrist, in the same place where once it was broken before. Only the larger bone broke. (T.S.R. 47. 2 P.M. 80. S.S. 65.)

July 24. Friday. This has been a notable day for Lockeford, as there has been a birth and a marriage. To Mr. and Mrs. Fred Allen was born a second son. Chandler Montgomery was married to Parlee McGary, daughter of Simpson McGary. Received letters from Theresa. Calvin, Ada and Wille Cooke, and wrote to Theresa. She now has crutches and is learning to walk with them. Calvin writes that Frank Locke sailed from boston for Cal. by way the Isthmus of Panama on the Steamer Segurancia on the 14th inst. after a very enjoyable visit with Eastern friends. Calvin showed him about New York and Boston. The Cookes write of great disappointment in that the people there do not renew their call to them for another year but desire them to remain until the close of the present year, or until they find an other opening. This means another removal and they are dreading it. (T.S.R. 50. 2 P.M. 85. S.S. 71.)

July 28. Tuesday. Received a postal from Theresa and wrote to her and to the

July 29. Wednesday. Hannah went to a dentist in Lodi and had two teeth filled. She also called on the DeKays - found Mrs. DeKay in bed sick with muscular rheumatism of the back and lumbago. Mr. DeKay has returned from San Francisco, but is engaged to go to Pacific Grove this week, where the W.C.T.U. Congress is in session and deliver a lecture. Exchanged letters with Theresa. She is now out of the Hospital, much to her delight. After being there nine weeks and three days, she was taken in a carriage to her former boarding place. She is yet rather helpless, as she can walk but a few steps at a time on her crutches, but feels she is daily gaining strength. (T.S.R. 52. 2 P.M. 90. S.S. 79.)

Aug. 4. Tuesday. Received letters from Ida and Eunice and wrote to the children in Humboldt co. Eunice writes of helping Susie Pascoe with her sewing, as she has been making preparations to enter the Berkeley University when the term opens. But Ida writes she fears Susie may be disappointed after all, in not being able to get the necessary money for going. Benton had been intending to loan her money, but in some way he has been defunded in money matters by some man at the mill where he works. Ida cannot let her have money at present. Perhaps Susie can borrow on her own account. Ida writes of their new pastor, Rev. Baker, who has taken the place of Rev. Griffiths. I fear this Mr. Baker is sadly out of the way in his practice if not in his theology, for in a late Sund. service, speaking on the matter of amusements, he told his people that he did not think card-playing were wrong - that he enjoyed them himself. O how much harm a man in his position can do! He is only twenty eight years old. May the Lord being him to a better mind, or remove him from that position. Ida is grieving over it. Their school opens this week and she intends to board the teacher. How can she accomplish so much? (T.S.R. 50. 2 P.M. 90. S.S. 70.)