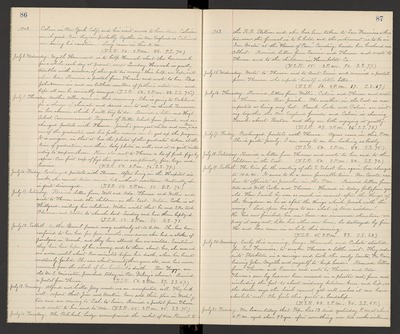 July 8. Wednesday. Myrtle Hammond is to help Hannah about the housework for a while each day at present, except Sunday. Hannah is greatly troubled with sciatica, if she gets too weary - this help, we hope, will relieve her. Received a postal from Theresa and wrote to her. Bro. John came in and we talked matters of father's estate over and hope all can be amicably arranged. (T.S.R. 50. 2 P.M. 88. S.S. 75.)

July 9. Thursday. Mother Allen came in this morning. She is going to Oakland for a change of climate and desires me to act a church Treasurer in her absence, which I will try to do. Received a letter and High Commencement Program of Butte School from Josiah and exchanged postals with Theresa. Josiah's youngest child and son Ben was one of the graduates, and his father assures one he got up the program. It is unique, in that it has the photos of the graduates taken at the time of graduation, and their baby photos as well, and it is quite interesting to compare them. Have also sent to Theresa a box of fresh figs by express. Our first crop of figs this year is exceptionally fine, large and luscious. (T.S.R. 54. 2 P.M. 92. S.S. 79.)

July 10. Friday. Exchanged postals with Theresa. After being in the Hospital six weeks, she cannot turn over in bed without assistance. Naturally she is quite discouraged. (T.S.R. 54. 2 P.M. 93. S.S. 78.)

July 11. Saturday. Received letters from Will and Ada, Theresa and Willie and wrote to Theresa and the children in the East. Weldon Cooke is at Hillyard, visiting his relatives. Willie writes that he and Etta took Florence and Walter to church last Sunday and had them baptized. (T.S.R. 53. 2 P.M. 88. S.S. 73.)

July 12. Sabbath. Mother Bruml passed away suddenly at 10 A.M. She has been confined to her bed for four months, ever since she had a stroke of paralysis in March, and they have allowed her no visitors. Sometimes they have had hopes of her recovery, and to those about her, she seemed no worse until about then minutes before her death, when her heart suddenly failed. She was about seventy three years old, and has never recovered from the shock of her husband's death. Rev. Triggs, an old M.E. Minister, preached today in Rev. DeKay's absence. Received a postal from Theresa. (T.S.R. 50. 2 P.M. 87. S.S. 67.)

July 13. Monday. Alfred and Lilla Jovy made us an unexpected call. They look well - report that Jim and Mertice have sold their place in Washington and are coming to Cal. to live. Received a postal from Theresa and wrote to her and to Ada. (T.S.R. 45. 2 P.M. 85. S.S. 75.)

July 14.Tuesday. The Rebekah Lodge accompanied the casket of Mrs. Bruml to

1903. the R.R. Station and she has been taken to San Francisco where tomorrow the funeral is to be held and the interment is to be in San Mates at the "Home of Peace" Cemetery, beside her husband and Albert. Received letters from Eunice and Theresa and wrote to Theresa and to the children in Humboldt Co. (T.S.R. 55. 2 P.M. 92. S.S. 77.)

July 16. Thursday. Received letters from Willie, Calvin and Theresa and wrote to Theresa and Bro. Josiah. The weather in the East is now reported as being very hot. Frank Locke and Calvin are visiting together the New England friends and Calvin is showing Frank about Boston and they are both enjoying it greatly. (T.S.R. 47. 2 P.M. 86. S.S. 73.)

July 19. Sabbath. The time for the meeting of the S. School has again been changed to 10 A.M. It seems to be a more favorable time. Rev. Cowell was here to officiate as preacher in the P.M. Received letters from Ada and Will Cooke and Theresa. Howard is today forty four yrs. old. How I wish he was as much in earnest after the things of the kingdom as he is after the things which perish with the rising. Lord, open his eyes to see what is true wisdom! He has now finished his new barn - and immense structure - we pray it may not, like his other new barn, be destroyed by fire. He and Lou came in awhile this evening. (T.S.R. 45. 2 P.M. 83. S.S. 68.)

July 20. Monday. Early this morning, George, Hannah and Celeste started for San Francisco, to make Theresa a little visit. They rode into Stockton in a carriage and took the early Santa Fe train leaving John, Myrtle and myself to keep house. Received letters from Theresa and Eunice and wrote to Theresa and Ada. Theresa's sore leg has now been encased in a plaster cast, from and including the foot to about midway between knee and hip, as the doctor says the limb cannot get well unless it can have absolute rest. She feels this quite a hardship. (T.S.R. 48. 2 P.M. 80. S.S. 65.)

July 21. Tuesday. We learn today that Pope Leo 13 died yesterday P.M. at about 4 P.M. aged above 93 yrs. after something over two weeks sickness.