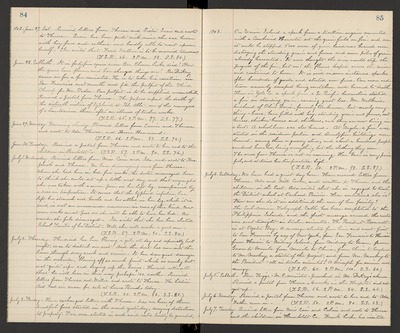 1703. June 27. Sat. Received letters from Theresa and Sister Susie and wrote to Theresa. Susie has been quite sick since she was here with hay fever and asthma and hardly able to wait upon herself. She writes that Fred Wallace is to be married tomorrow. (T.S.R. 64. 2 P.M. 98. S.S. 84.)

June 28. Sabbath. It is forty five years since Bro. Elmer Locke died! How the years have flown, and how changed things are! Rev. DeKay came in for a few minutes. He is to take his vacation in San Francisco next month and fell the pulpit of the Third Church for Mr. Rader. Our pulpit is to be supplied mean while. Received a postal from Theresa. The papers report the death of the sixteenth victim of typhoid at Palo Alto - one of the managers of a Sanitarium there, after an illness of twelve weeks. (T.S.R. 65. 2 P.M. 97. S.S. 77.)

July 1. Wednesday. Received letters from Miss Cain and Ida, and wrote to Bro. Josiah and Theresa. We have discouraging news from Theresa. When she had been in bed five weeks, the doctor encouraged her to thinks she could sit p a little next day, and that very night she was taken with a severe pain in her left leg, accompanied by a rise in temperature. It seems that the typhoid infection has left her stomach and bowels and has settled in her leg, which it is said, is not an uncommon occurrence in cases of this kind. Now more weeks must pass ere she will be able to leave her bed. No wonder she feels discouraged. Ida writes that she has been elected School Trustee of her District. Well, she will make a good one. (T.S.R. 57. 2 P.M. 90. S.S. 80.)

July 2. Thursday. The wind has been blowing a gale all day and especially last night, so as to disturb our rest. And the dust has come into the House through every crack and crevice. It has done great damage in the orchards, blowing off much first which is nearly but not quite ripe and drying up the berries. Howard estimates that he will lose in this way perhaps $100. worth. Received letters from Theresa and Willie and wrote to Theresa. The Ladies Aid had ice cream for sale at Laura Bund's today. (T.S.R. 60. 2 P.M. 86. S.S. 83.)

July 3. Friday. Have exchanged letters with Theresa. How we hear of three dreadful fires started in the wind yesterday, carrying destruction to property. Fire once started in such wind could hardly be quenched,

1903. On Union Island a spark from a traction engine connected with a Combined Harvester set the grain field on fire and ere it could be stopped 5000 acres of grain land was burned over destroying the standing grain and fences and some piles of grain already harvested. It was though the river would stop the progress of the fire, but no! The flames leaped across the river and continued to burn. It is said in some instances sparks flew hundreds of yards and started new fires. Once man and team narrowly escaped being overtaken and burned to death. Then in Yolo Co. a spark from a So. Pacific locomotive started a fire in standing grain, causing great loss. Mr. Watkins, husband of Olive Davis, formerly Beakeman, lost nearly everything - house, barn filled with hey, standing grain and fences, owl-houses, chicken-houses and chickens, and they are now living in a tent. A school house was also burned. At Angels, a fire was started in the residence portion and twenty five buildings were burned, among them a grocery store, and about a hundred people rendered homeless, losing everything but the clothing they were. The news from Theresa is not re-assuming. Her knee is very painful, and at times her temperature high. (T.S.R. 50. 2 P.M. 98. S.S. 87.)

July 4. Saturday. We have had a quite day here. Have received letters from Theresa, Ada and Will Cooke, and written to Theresa and the children in the East. Ada writes that he is engaged to teach the District school at Orchard Prairie. How ambitious she is! How can she do it in addition to the care of her family? The Sub-marine Telegraph Cable has been completed to the Philippine Islands and the first message around the world was sent tonight in twelve minutes. The President - Roosevelt - is at Oyster Bay. A message started from him and went first to San Francisco by way of New York, from San Francsico to Hawaii from Hawaii to Midway Island, from Midway to Guam, from Guam to Manila from Manila to China, from China to England to Mr. Mackay, a starter of the project, and from Mr. Mackey to the President - all in twelve minutes! a triumph for science and energy. (T.S.R. 62. 2 P.M. 100. S.S. 80.)

July 7. Tuesday. Received letters from Miss Cain and Calvin and wrote to Theresa and the children in Humboldt Co. Frank Locke has visited