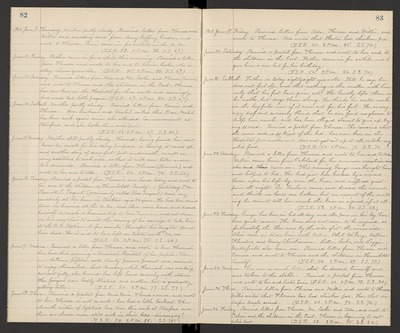 June 13. Saturday. Received letters from Ada and Mr. Cooke and Theresa (Brownie) and wrote to Theresa and the children in the East. Theresa has now been in the Hospital for three weeks and seemingly has made but little progress. (T.S.R. 47. 2 P.M. 80. S.S. 67.)

June 14. Sabbath. Weather partly cloudy. Received letters from Eunice and Theresa. Mrs. Ambrose and Mabel called this P.M. Mabel has been sick again since she attended Commencement at Stanford, and she looks thin and pale. (T.S.R. 50. 2 P.M. 67. S.S. 60.)

June 15. Monday. Weather still partly cloudy. Howard, having found his new barn too small for his dairy purposes, is having it raised up and another story of seven feet put underneath, as well as wing addition to each side, so that it will now better answer his demands. Received a letter from Theresa (Brownie) and wrote to her and to Ada. (T.S.R. 50. 2 P.M. 74. S.S. 62.)

June 16. Tuesday. Received a postal from Theresa's own hand today and wrote to her and to the children in Humboldt County. Yesterday P.M. Roswell c. Sargent (commonly called Ross Sargent) died very suddenly at his home in Stockton, aged 82 years. He had been around town on business all the A.M. and then came home and dressed himself to make a business trip to San Francisco, and sat down in his easy chair to await the coming of his carriage to take him to the R.R. Station. A few minutes then after his daughter found him dead. He is said to have left an Estate worth $900,000. (T.S.R. 50. 2 P.M. 75. S.S. 64.)

June 17. Wednes. Received a letter from Theresa and wrote to her. Hannah has had this evening a Musical Recital of her pupils. There were between fifteen and twenty persons present and seemed to enjoy themselves. Last Monday, while Hannah was making currant jelly, she burned her left hand severely with steam her fingers were badly blistered and swollen, but is gradually getting better. (T.S.R. 50. 2 P.M. 77. S.S. 73.)

June 18. Thurs. Received a postal from Miss Weir, Theresa's nurse, and wrote to her, Theresa is not so well has had a little back set. The eleventh victim of typhoid has died this week at Stanford and there are eleven more still sick in their beds - discouraging! (T.S.R. 50. 2 P.M. 88. S.S. 75.)

June 21. Sabbath. Father is today eighty eight years old. Still he says he does not feel old, and that nothing is the matter with him only that his feet have given out. He hardly lifts them as he walks, but drags them along. He thinks he could work in the hay field now if it were not for his feet. He is very, very deaf and so nearly blind that he can find no glasses to help him much, and has been obliged almost to give up trying to read. Received a postal from Theresa. She remains about the same and is so tired of the bed - has now been in the Hospital four weeks, and does not yet sit up at all, or take any solid food. (T.S.R. 50. 2 P.M. 79. S.S. 70.)

June 22. Monday. Received a letter from Theresa and wrote to her and to Ada Nellie came home from Oakland for her summer vacation and she and Alice came in. This evening George was brought home and helped to bed. He had just been kicked by a vicious horse upon his left leg, near the knee and suffered great pain all night. Dr. Barbour came and dressed the wound and thinks no bones are broken, but on account of the swelling he cannot tell how much the knee is injured, if at all. (T.S.R. 53. 2 P.M. 84. S.S. 68.)

June 23. Tuesday. George has been in bed all day and the pain in his leg has been quite severe. The knee does not seem to be injured, as fortunately the blow was by the side of it - the inner side. Alice came in to see him with Nellie, Ethel McGary, Nellie Flanders and Mary Christiansen. Lottie Locke and Lizzie Westerfield also came in. Received letters from Theresa and Eunice and wrote to Theresa and the children in Humboldt County. (T.S.R. 54. 2 P.M. 89. S.S. 77.)

June 25. Thurs. Received letters from Theresa and Willie and wrote to Theresa Willie writes that Florence has had chicken pox. How that distemper travels around. (T.S.R. 62. 2 P.M. 94. S.S. 76.)