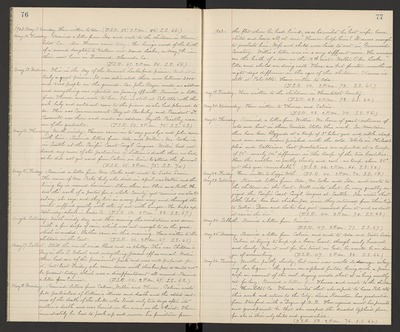 May 13. Wednes. This is the day of the Annual Locke ford picnic. And it is truly a great picnic. It was estimated there were between 3000 and 4000 people on the ground. Rev. John Bryer made an address and everything was reported as passing off well. Received a letter from Theresa and wrote to her. She is still at Palo Alto with the sick baby and could not come to the picnic as she had planned to do. This was Commencement Day at Berkeley and President T. Roosevelt was there and made an address. Myrtle Priestley was one of the graduates. (T.S.R. 50. 2 P.M. 75. S.S. 63.)

May. 14. Thursday. North windy. Horace came in to say goodbye and John came with him. Received letters from Ada and Willie. Mr. Cooke is in Seattle at the Pacific Coast Cong'l Congress. Willie had not heard any more of the particulars of Lillian's death than we had, as he did not get word from Calvin in time to attend the funeral. (T.S.R. 45. 2 P.M. 75. S.S. 70.)

May 15. Friday. Received a letter from Mrs. Perks and wrote to Sister Susie. The name of Mrs. Perk's baby who died in April was Walter and the living boy is named Lawrence. Then there are Olive and Ruth. He does the work of a pastor for a whole County, yet receives no stated salary, she says, and they live in a very poor way, and through the winter suffered greatly with cold, if not with hunger. He keeps up two Sunday schools in Modoc Co. (T.S.R. 50. 2 P.M. 83. S.S. 67.)

May 16. Saturday. North windy day and this evening the wind storm was severe with a few drops of rain, which was not enough to do the good which is needed. Father came in this morning . Have written to the children in the East. (T.S.R. 42. 2P.M. 67. S.S. 61.)

May 17. Sabbath. Still the north wind blows and is chilly. This was Children's Day in the S. School and everything passed off as usual. Nellie Allen had one of the prominent parts and was well prepared for it, but last Friday she came down with chicken pox so could not be present today, which was a disappointment all around. Received a letter from Eunice. (T.S.R. 42. 2 P.M. 69. S.S. 62.)

May 18.Monday. Received letters from Calvin, Willie and Theresa. Calvin wrote full particulars of Lillian's illness and death and the added sadness of the death of the child, who lived only two days after its mother's death and was buried in her arms on the 4th inst. Then immediately he had to pack up and remove his furniture from

1903. the flat where he had lived, so as he writes he "lost wife, lover, child and home all at once." Heaven help him! It seems enough to prostrate him. Wife and child were laid to rest in Greenwood Cemetery. Willie's letter was in a very different vein. He announces the birth of a son on the 12th inst. "Walter Ober Locke." Etta and child are doing well. There are but fourteen months and eight days difference in the ages of the children. Theresa is still at Palo Alto. Heave written to Ada. (T.S.R. 42. 2 P.M. 73. S.S. 61.)

May 21. Thursday. Received a letter from Willie. We learn of great extremes of cold and heat in these United States this week. In Montana there have been blizzards at a temp of 3- below zero and cattle, sheep and even some herders punished with the cold. While in Philadelphia and Baltimore heat prostrations are reported at a temp. of 92- - nearly 100- difference in the temp. of the two localities. Here the weather is partly cloudy and cool - no temp. above 85- yet this year - remarkable! (T.S.R 46. 2 P.M. 66. S.S. 56.)

May 23. Saturday. Received letters from Ada, Mr. cooke and Ida, and wrote to the children in the East. Will writes that he very greatly enjoyed the Pacific Coast Cong'l Congress at Seattle. Ida writes that little Delia has had chicken pox since they returned from their trip to Scotia. Dean and Locke had just recovered from it and no doubt it was "in the air." (T.S.R. 44. 2 P.M. 72. S.S. 63.)

May 25. Monday. Received a letter from Calvin and wrote to Ada and Sister Susie Calvin is trying to keep up a brave heart, though sorely bereaved and lonely. Were it not for his trust in God, he would be in danger of succumbing. (T.S.R. 47. 2 P.M. 82. S.S. 66.)

May 26. Tuesday. Weather partly cloudy, but rain now would do damage as haying has begun - the grain on upland fields being such a poor crop on account of the cool, drying winds that it is being mostly cut for hay. Received a letter from Theresa and wrote to the children in Humboldt Co. Theresa writes that she expects to leave Palo Alto this week and return to the City. Lucia Keniston has graduated from Stanford with a Degree of A.B. How rejoiced must her parents and grandparents be that she escaped the dreaded typhoid fever, for she is their only child and grandchild. (T.S.R. 53. 2 P.M. 76. S.S. 60.)