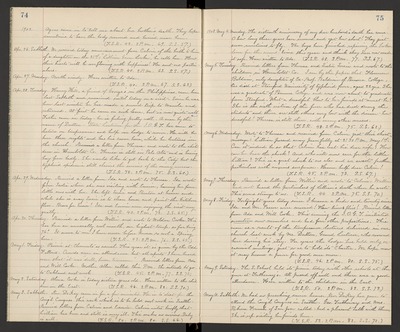 Apr. 28. Tuesday. Harvey Hill, a friend of George's in the Philippines, came here last Sabbath and remained until today on a visit. Since he was here last winter he has made a second trip to Manila and returned. At first he came on sick leave, but is now quite well. Father came in today he is feeling pretty well. A man by the name of Dutton. State Lecturer for the I.O.G.T has come to lecture on temperance and help our Lodge to revive. He will be here three nights and has his room here, while he lectures in the church. Received a letter from Theresa and wrote to the children in Humboldt Co. Theresa is still in Palo Alto and is having hay fever badly. She would like to get back to the City but the typhoid epidemic still claims the services of the many nurses. (T.S.R. 38. 2 P.M. 75. S.S. 60.)

Apr. 29. Wednesday. Received a letter from Ida and wrote to Theresa. Ida wrote from Scotia where she was visiting with Eunice, having her four little ones with her, She left Susie and Benton at home and while she is away Susie is to clean house and paint the kitchen floor. Bravo for Susie! Ida and Eunice were enjoying the visit very greatly. (T.S.R. 40. 2 P.M. 72. S.S. 65.)

May 1. Friday. Picnic at Clements as usual. This year it is given by the Odd Fellows. Crowds were in attendance but all reports I have heard were that it was "dull, bum, tiresome." Received letters from Ada and Will Cooke. Mother Allen called this P.M. She intends to go to Oakland next week. (T.S.R. 45. 2 P.M. 77. S.S. 71.)

May 3. Sabbath. Rev. Dekay came in for a few minutes. He is to start for the Cong'l Congress this week which is to be held next week in Seattle. Received letters from Calvin and Eunice. Calvin writes briefly that Lillian has been and still is very ill. This makes us anxious. Baby is well. (T.S.R. 50. 2 P.M. 80. S.S. 66.)

1903. May 4. Monday. The sixteenth anniversary of any dear husband's death has come. O how long these years have seemed and yet how short! They just seem sometimes to fly. The boys have finished repairing the broken levee for the second time this year and think they have now made it safe. Have written to Ada. (T.S.R. 48. 2 P.M. 77. S.S. 67.)

May 5. Tuesday. Received letters from Theresa and Sister Susie and wrote to the children in Humboldt co. I see by the paper that Florence Baldwin, only daughter of Ex - Prof. Baldwin of Pomona College, has died at Stanford University of typhoid fever, aged 22 yrs. She was a graduate of Pomona College and was now about to graduate from Stanford. What a dreadful blow to her friends it must be! She is the sixth victim of the fever who has died among the students and there are still others very low with the disease how dreadful! Theresa is still there with many other nurses. (T.S.R. 48. 2 P.M. 75. S.S. 62.)

May 6. Wednesday. Wrote to Theresa and received from Calvin just this short message; "Lillian passed away peacefully at 2:30 P.M. May 1st" Can it indeed be so that Calvin has lost his dear wife ? How can he bear the shock? And who will now care for the little Lillian? This is a great shock to us also and we await further particulars with anxious suspense. Heaven help dear Calvin! (T.S.R. 45. 2 P.M. 73. S.S. 67.)

May 8. Friday. Fortyeight years today since I became a bride and twenty since Ida and Mr. Pascoe were married! How time flies! Received letters from Ada and Will Cooke. This evening the I.O.G.T. initiated seventeen new members and had four other propositions. This came as a result of the temperance lectures delivered in our church last week by Mr. Dutton, Grand Lecturer, who roomed here during his stay. For years the Lodge has held only occasional meetings, just so as to hold its Charter. We hope now it may become a power for good once more. (T.S.R. 46. 2 P.M. 80. S.S. 75.)

May 10. Sabbath. We had no preaching service because Rev. DeKay has gone to attend the Cong'l Congress in Seattle. Geo. Tretheway and Mrs. Rebecca French of San Jose called - had pleasant talk with them She is up visiting her friends here. (T.S.R. 52. 2 P.M. 82. S.S. 72.)