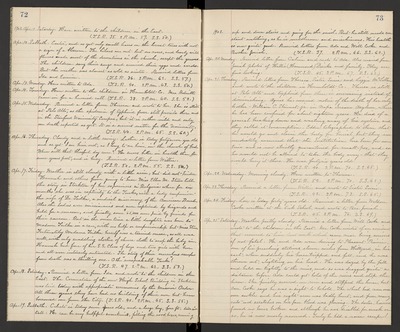 Apr. 12. Sabbath. Easter, and as yet only small leaves on the locust trees with not a sign of a blossom. The lilacs are out but no roses, and lovely wild flowers made most of the decorations in the church, except the greens. The children sang their songs and received their eggs and cards. But the weather was almost as cold as winter. Received letters from Ida and Eunice. (T.S.R. 36. 2 P.M. 62. S.S. 57.)

Apr. 15. Wednesday. Received a letter from Theresa and wrote to her. She is still at Palo Alto, as the epidemic of typhoid fever still prevails there and in the Stanford University Campus, but it is rather mild and only one death reported as yet. It is a serious matter for the University. (T.S.R. 44. 2 P.M. 65. S.S. 60.)

Apr. 17. Friday. Weather is still cloudy with a little rain, but did not hinder Hannah and others from going to hear Miss Ellen M. Stone tell the story in Stockton of her experiences in Bulgaria where for six months she was in captivity of Turks, with a lady companion the wife of Dr. Tsilka, a medical missionary of the American Board. Also the ladies were missionaries and were captured by brigands and held for a ransom, and finally some $65,000 were paid by friends for their ransom. But in the meantime a little daughter was born to Madame Tsilka in a cave, with no help or companionship but Miss stone. Fortunately Madame Tsilka herself was a trained nurse, so all was well, with only swaddling clothes of cheese cloth to wrap the baby in. Hannah had four of her S.S. Class of boys and two girls with her and all were intensely interested. The story of their marvelous escapes from death was a thrilling one. O the "unspeakable Turks!" (T.S.R. 47. 2 P.M. 55. S.S. 53.)

Apr. 18. Saturday. Received a letter from Ida and wrote to the children in the East. The Cornerstone of the new High School Building in Stockton was laid today with appropriate ceremonies by the Masonic Order. All these years they have had no building of their own but have borrowed one from the City. (T.S.R. 40. 2 P.M. 65. S.S. 55.)

1903. up and down stairs and going for the mail. But he still needs constant watching, as he is meddlesome and mischievous. His health is now quiet good. Received letters from Ada and Will Cooke and Brother Josiah. (T.S.R. 37. 2 P.M. 66. S.S. 62.)

Apr. 21. Tuesday. Received letters from Theresa, Sister Susie and Lizzie McLellan and wrote to the children in Humboldt Co. Theresa is still at Palo Alto and typhoid fever there is increasing instead of diminishing. Agnes has received notice of the death of her only brother - William C. Stewart, jr. in Napa Insane Asylum, where he has been confined for about eighteen years. He died of a general breaking down and wasting away of his system and they called it consumption. Eddie telegraphed to them that he would go and claim the body for burial, but they immediately answered that the Institution has been for sometime and is now strictly quarantined for small-pox, and so he would not be allowed to take the body away- that they would bury it there. He was fortysix years old. (T.S.R. 40. 2 P.M. 70. S.S. 65.)

Apr. 25. Saturday. Weather partly cloudy. Received a letter from Will Cooke and wrote to the children in the East. Mr. Cooke writes of an accident that occurred to him last week which came near being serious if not fatal. He and Ada were driving to Pleasant Prairie one of his preaching stations, eleven miles from Hillyard, in his cart, when suddenly his horse tripped and fell, and he was thrown out, alighting on his head. He was dazed by the fall and held on tightly to the reins, and so was dragged quite a distance before Ada could get hold of the reins and stop the horse. She finally secured one rein and stopped the horse, but Mr. Cooke says he was a sight to behold. The wheel had run over one ankle and his right arm was badly hurt, and from many cuts and scratches on his face blood was flowing. The doctor, however found no bones broken and although he was disabled for a week or so, he is now nearly recovered. Truly he had a narrow escape!