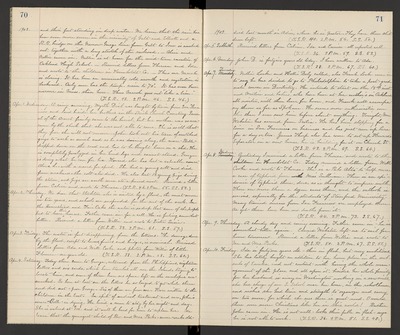 1903. and their feet standing in deep water. We learn that the rain has been even more severe in the vicinity of Galt and Elliott and a R.R. bridge on the Narrow Guage line from Galt at Jone is washed out, together with a long stretch of the railroad. - Alice and Nellie came in. Nellie is at home for the mid-term vacation of Oakland High School. - Received letters from Theresa and Ida and wrote to the children in Humboldt Co. - Thus our March is closing. It has been an unusually cold month and vegetation is backward. Only once has the temp. risen to 70-. it has even been warmer in Mass. than here. Thus March goes out "like a lion". (T.S.R. 48. 2 P.M. 46. S.S. 46.)

Apr. 1. Wednesday. A rainy morning. Myrtle Dial was brought by train from San Francisco and laid beside her brothers in the Brick Church Cemetery. Several of the Arnest family came to the burial, but her mother was so overcome by the shock that she was not able to come. She is so ill that they fear she will not recover. - John took out his team of matched greys to work as usual and as he was driving along, the mare-Belle- dropped down on the road and had to be brought home on a sled. She is completely paralyzed in her hind legs and cannot stand. George is doing what he can for her. Howard also has lost a valuable mare- Alma L. - with a record for speed. She had a young colt and died from weakness - the colt also died. He also lost 18 young pigs during the storm, and pigs are worth seven ets. a pound now. Received a letter from Calvin and wrote to Theresa. (T.S.R. 46. 2 P.M. 55. S.S. 53.)

Apr. 2. Thursday. We hear that Stockton also is visited by a flood, the most severe in ten years, and schools are suspended for the rest of the week. In the Homestead and Fair Oaks the water is so deep that some of the people had to leave their houses. Father came in for a call. He is feeling somewhat better. Received a letter from Willie and wrote to Sister Susie. (T.S.R. 38. 2 P.M. 61. S.S. 57.)

Apr. 3. Friday. The water is fast disappearing from the bottoms. The damage done by the flood, except to levees fences and bridges, is nominal. Received letters from Ada and Will Cooke and photos from Willie of little Florence - one year old. (T.S.R. 38. 2 P.M. 68. S.S. 60.)

Apr. 4. Saturday. Today there came to George, returned from the Philippines, eighteen letters and six cards, which have traveled all our the Islands trying to locate him and some of them have no space left on the envelopes unmarked. So here at last are the letters he so longed to get while there and did not- poor George. Six of them are from me. Have written to the children in the East. In spite of medical treatment and care, John's mare - Belle - is dying. He hired a man to stay by her night and day. She is valued at $100. and it will be hard for him to replace her. We learn that the youngest child of Rev. and Mrs. Perks-seven-weeks old -

Apr. 7. Tuesday. Nellie Locke and Hattie Daly called, also Frank Locke came in to say he has decided to go to Philadelphia to take a post-graduate course in Dentistry. He intends to start on the 15th inst. and Mertice and babies, who have been at her mother's in Oakland all winter, will then leave for home, and Frank will accompany them as far as Spokane. He seems more enthusiastic over this than I ever saw him before about anything. Tonight, Mr. Webster has arrived from Scotia. He has been stopping for a time in San Francisco on business and has just run up here for a day or two. James Thorp also has come to set up Howard's Separator in a new house he is building for it on Church St. (T.S.R. 43. 2 P.M. 69. S.S. 64.)

Apr. 8. Wednes. Yesterday I receive a letter from Theresa and wrote to the children in Humboldt Co. Today received a letter from Will Cooke and wrote to Theresa. She is a Palo Alto to help nurse a case of typhoid fever with Miss Sullivan. There is an epidemic of typhoid there, due, as is thought to impure milk. There are more than a dozen cases there, and the outlook is serious, especially for the students of Stanford University. Many trained nurses from San Francisco are employed there. As yet there have been no deaths from it. (T.S.R. 44. 2 P.M. 73. S.S. 67.)

Apr. 10. Friday. Ida is forty one years old - thin in flesh, but very ambitious. She has lately bought an addition to her home place in the suburbs of Eureka, and not content with having the whole management of the place and all upon it, besides her whole family for her husband is away in Washington working in a sawmill, she has charge of one S. School near her home, in the school house, and wishes she had time and strength to organize and carry on two more, for which she sees there is great need. O would there were more Christmas like her in this world! Brother John came in. He is not well - looks thin feeble in flesh - says he is not able to work. (T.S.R. 36. 2 P.M. 51. S.S. 48.)