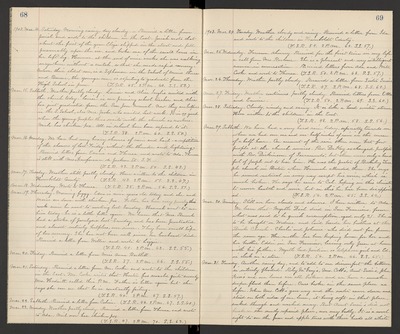 1903. Mar. 14. Saturday. Morning rainy, day cloudy. - Received a letter from Josiah and wrote to the children in the East. Josiah wrote that about the first of the year Eliza slipped in the street and fell pnesumably upon the ice, and broke one of the small bones in her left leg. However, at the end of nine weeks she was walking everywhere without a crutch, so that she made rapid recovery. Nelson, their eldest son, is a Sophomore in the School of Mines there and Bennie, the younger one, is expecting to graduate from the High School in June. (T.S.R. 45. 2 P.M. 60. S.S. 53.)

Mar. 15. Sabbath. Weather partly cloudy. Louise and Alice Inglis united with the church today. Louise is our primary school teacher and Alice has just graduated from the San Jose Normal. Now they are helpers in the S. School, also Mrs. Jacks, who united last week. It is so good when the young people thus unite with the church as workers. Merle has chicken-pox. All in school have been exposed to it. (T.S.R. 38. 2 P.M. 60. S.S. 50.)

Mar. 16. Monday. We have had very heavy showers of rain and hail - a repetition of the showers of last Friday, without the thunder and lightning. Received letters from Eunice and Theresa and wrote to Ada. Theresa is still with Mrs. Kaufmann on Jackson St. S.F. - (T.S.R. 43. 2 P.M. 50. S.S. 43.)

Mar. 19. Thursday. Morning foggy. Edna is nine years old today and she and Marie are down with chicken-pox. Father has been very poorly this week since he went to meeting last Sunday. Hannah went to see him today - he is a little better again. We learn that Mrs. Bruml had a stroke of paralysis last Sunday, and has been prostrated and almost entirely helpless, ever since. They have small hope of her recovery. She has not been well since her husband died. Received a letter from Willie and wrote to Lizzie. (T.S.R. 40. 2 P.M. 62. S.S. 55.)

Mar. 21. Saturday. Received a letter from Mr. Cooke and wrote to the children in the East. Mr. Cooke writes that Hester has measles quite severely. Mrs. Hodnitt called this P.M. Father is better again but she says she can see that he is constantly failing. (T.S.R. 40. 2 P.M. 67. S.S. 57.)

Mar. 25. Wednesday. Forenoon showery. Received for the first time in my life a call from Mrs. Barbour. She is a pleasant and very intelligent woman in conversation. - Received letters from Ada and Will Cooke and wrote to Theresa. (T.S.R. 50. 2 P.M. 68. S.S. 57.)

Mar. 29. Sabbath. We have had a very hard rain today, especially towards eve when we had over one and one-half inches of rain in the course of a half hour. On account of the rain there were but few people at the church services. Rev. DeKay exchanged pulpits with Rev. Dickinson of Sacramento, but there were only a handful of people out to hear him. He was the pastor of Berkeley Temple church in Boston when Hannah attended there. She says he seemed natural in every way except his voice, which is much broken. He says he came to Cal. hoping in this climate to recover health and voice, but in this he has been disappointed. (T.S.R. 54. 2 P.M. 65. S.S. 62.)

Mar. 30. Monday. Still we have clouds and showers. I have written to Ada. We learn that Myrtle Dial died in San Francisco, from what was said to be quick consumption, aged only 21. She is to be brought on Wednes, and laid beside her brothers at the Brick Church - Charlie and Johnnie - who died not far from the same age. Her mother has been keeping house for her and her brother Eddie in San Francisco, leaving only Jesse at home with his father. Myrtle had position as telephone girl and Ed, is clerk in a store. (T.S.R. 56. 2 P.M. 66. S.S. 65.)

Mar. 31. Tuesday. Another rainy day, and to add to our discomfort the bottom is entirely flooded. Riley McGary's, Mrs.Cobb's, Aunt Susie's, John Kerr's and our levees are all broken and we have a much deeper flood than before. Ours broke in the same place as before. When Mrs. Cobb's gave away and the water came down and stood on both sides of our levee, it being soft in that place, soaked through and washed away. But Aunt Susie's did not break in the newly repaired place, nor very badly. It is a novel sight to see the pear and apple trees with their heads all white