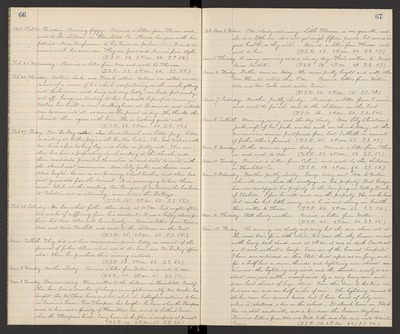 Feb. 26. Thursday. Wallace Locke and Frank called. Wallace was called on account of a mare of his which was pasturing on the ranch, getting into barbed wire and being cut very badly - one hind foot nearly cut off. George is treating it but has small hopes of its recovery. Wallace has built a new dwelling house at Diamond and intends soon to move into it - as soon as the paint is dry. He thinks the climate there agrees with him. He is looking quite well. (T.S.R. 34. 2 P.M. 60. S.S. 56.)

Feb. 27. Friday. Rev. DeKay called, also Laura Bruml and Lilla Jory. Lilla is visiting at Father Jory's with her two babies. She had Melvin with her - he is a fine looking boy, and Lilla is pretty well. This evening there has been a preparatory church meeting at the church, and three candidates presented themselves as candidates to unite with the church next communion - Mrs. Lily Jacks and Louise and Alice Inglis. Louise is our primary school teacher and Alice has just graduated from the Normal. It is encouraging to have them come. While at the meeting. Rev. Burgess of Auburn, who has been to Palestine and is returning, came to see the DeKays. (T.S.R. 35. 2 P.M. 63. S.S. 56.)

Mar. 1. Sabbath. They did not have communion service today on account of the funeral of father Allen, which was at the house and Rev. DeKay officiated. Then he preached this evening instead. (T.S.R. 38. 2 P.M. 66. S.S. 60.)

Mar. 3. Tuesday. Forenoon rainy. Have written to the children in Humboldt County. There have been a number of changes in neighbors recently. Mr. Meeker has bought the McCloud house and lot, while the Gallaghers continue to live in Eunice's house. Geo. Thompson has bought the house where the Stampers used to live, and a family of Hamiltons have moved to Luther's house where the Thompsons lived. Every house in the place is occupied at present. (T.S.R. 44. 2 P.M. 55. S.S. 48.)

Mar. 11. Wednesday. Weather partly cloudy. George today sent $1400. to Willie who will now release the mortgage on his property. But George has now mortgaged his property to the San Francisco Valley Bank of Stockton. I fear he will never own the property. He works hard but makes but little money, and he is not strong in health. Have written to Theresa. (T.S.R. 44. 2 P.M. 66. S.S. 56.)

Mar. 13. Friday. The morning was cloudy and rainy but the sun shone out at the noon time for a little while, but soon the sky became overcast with heavy, dark cloudy, and at 4P.M. it was so dark I could not see to read without a lamp. Soon one of the heaviest tempests I have ever witnessed in this State burst upon us in fury, and for a half hour or more, thunder and lightning were almost continuous - the lightning very vivid, and the thunder nearly a constant roar and rattle, accompanied by a very heavy rain and some hail showers of large stones. From this time to bed time we had over one and one-half inches of rain. The lightning seemed to strike near here several times but I have heard of only once when it shattered a tree on the island, It struck twice in Stockton - a steel windmill, and a tree near the Insane Asylum. Received letters from Ada and Will Cooke and Ida, and wrote to sister Susie. (T.S.R. 50. 2 P.M. 64. S.S. 50.)