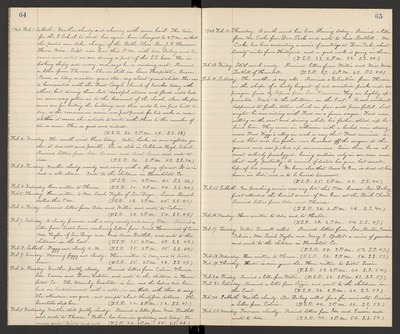 1903. Feb.1. Sabbath. Weather cloudy and showery with some hail. The time for the S. School to meet has again been changed to 2P.M. so that the pastor can take charge of the Bible Class. Rev. J.K.Harrison Home Miss. Supt. was here this P.M. with Mr. DeKay, and he came and called on one during a part of the S.S. hour. He is looking sleepy and weary, and says he is needing rest. Received a letter from Theresa. She is still in Lane Hospital. Susie Pascoe is today nineteen years old - my eldest grandchild. She was to have united with the First Cong.l Church of Eureka today with others, but during these late dreadful storms and floods, water had in some way gotten into the basement of the church where the furnaces are for heating the building, and there could be no fires built today, so the communion service was postponed for two weeks or more. Whenever it occurs, she intends to unite with others to the number of ten or more. This is good news indeed. (T.S.R. 36. 2 P.M. 49. S.S. 38.)

Feb. 7. Saturday. A cloudy forenoon with a very windy and rainy P.M. Received a letter from Sister Susie enclosing letters from Sarah Hammond of Carver Mrs. Taylor of San Diego and Miss Anna Bartlett, and wrote to the children in the East. (T.S.R. 35. 2 P.M. 43. S.S. 43.)

Feb. 10. Tuesday. Weather partly cloudy. Received letters from Calvin, Theresa, Ida, Eunice and Dean Webster, and wrote to the children in Humboldt Co. The Meneley Quartelle is here and the Ladies Aid have had an Entertainment with a supper in our Hall, with them to sing. The attendance was good - net receipts about thirty five dollars. The Quartelle sleep here. (T.S.R. 40. 2 P.M. 52. S.S. 47.)

Feb. 14. Saturday. The weather is very cold. Received a Valentine from Theresa in the shape of a lovely bouquet of red carnation pinks and asparagus ferns by Express from San Francisco. They are highly appreciated. Wrote to children in the East. A sad accident happened to father Allen which we fear will prove fatal. Last night he was riding with Fred on a farm wagon. Fred was sitting on the seat and driving while his father stood up behind him. They came in collision with a barbed wire strung across Fred Figge's alley in such a way that Fred received a hard blow and his father was knocked off the wagon to the ground and was picked up unconscious. Since then he is almost entirely paralyzed, having motion only in one arm and that only partially. A council of doctors has given but small hope of his recovery. We learn also that Amos W. Gove is dead at his home in Lodi and is to be buried tomorrow. (T.S.R. 25. 2 P.M. 43. S.S. 40.)