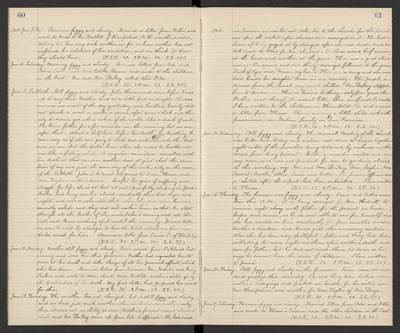 Jan. 11. Sabbath. Still foggy and cloudy. John Hammond came before I was up to say that mother died at a little past midnight. She was unconscious most of the day yesterday and breathed heavily - did not speak a word or make a sound after seven o'clock and then only to answer yes when asked if she would like a drink of water. She knew father for a few minutes in the morning, but no one after that. About a half hour before her death her breathing became easy as if she were going to sleep and continued so to the last and no one but the doctor know when she ceased to breathe - it was like a falling asleep. A singular coincidence connected with her death is, that our own mother died at just about the same time of day and just the same day of the week, early on the morn of the Sabbath. John is to send telegrams to Susie, Horace and Mrs. Taylor - mother's cousin. So after her years of suffering and struggle for life, she is at last at rest - peacefully sleeping in Jesus. Father had hung over her almost constantly these last days and nights and was so exhausted that when the end came, he was soundly asleep and they did not waken him, so that he slept through all the bustle of the undertaker's coming and all the rest, and knew nothing of it until the morning. It was better so, now he will be stronger to bear the trial, which we fear may be too much for him. Received a letter from Eunice C. of Sturbridge. (T.S.R. 30. 2 P.M. 40. S.S. 37.)

Jan. 12. Monday. Weather still foggy and cloudy. Susie arrived from Oakland last evening and was here this forenoon. Mother had requested her to come at her death and take charge of all her personal effects, which she has done. Received letters from Eunice, Ida, Webster and Irving Parker, and wrote to Ada, also to Miss Bartlett, mother's sister, giving the particulars of her death. My fist letter had prepared her mind for this. (T.S.R. 35. 2 P.M. 42. S.S. 40.)

Jan. 13. Tuesday. The weather has not charged, but is still foggy and cloudy and we had just such weather when are buried our Mother, only then it was not so chilly as now. Mother's funeral was at eleven o'clock and Mr. DeKay came up from Lodi to officiate. She had made

1903. us promise we would not take her to the church for the funeral nor open the casket after she was once arranged in it. She had a honor of being gazed at by strangers after she was dead. And no bell must be tolled for her, she said. So there was a brief service at the house and another at the grave. There was a good attendance at the services and over thirty carriages followed to the grave "Rock of Ages" and "Nearer, My God, to Thee" were sung and she was laid beside her daughter Anna in our cemetery. The people returned from the burial very much chilled. Rev. DeKay stopped here to dinner.- This is Susie's birthday - sixtyfour years old. Father went through the ordeal better than we feared he would. I have written to the children in Humboldt Co. and received a letter from Theresa. She is nursing a little child sick with pneumonia - an Italian family in San Francisco. (T.S.R. 36. 2 P.M. 48. S.S. 36.)

Jan. 14. Wednesday. Still foggy and cloudy. The Annual Meeting of the church was held here today and sixteen sat down to dinner together eight or ten of the members being detained by sickness or other causes from being present. Quite a number visited me in my room, as it was not prudent for me to go down stairs to the meeting, viz: Mr. and Mrs. DeKay, Mrs. Inglis Mrs. Condict, Mother Allen, Susie and Nettie. The former officers were re-elected after the reports had been submitted.- I have written to Theresa. (T.S.R. 35. 2 P.M. 38. S.S. 36.)

Jan. 15. Thursday. The forenoon was foggy and cloudy. Susie and Nettie were here this A.M. It is being arranged for Mrs. Hodnitt to remain right along with father for the present as housekeeper and nurse, as he is not able to care for himself and she has waited on him constantly for four months under mother's direction and knows just the necessary routine. Also she has been very faithful. John and Lucy had been intending to move right in there after mother's death and care for father, but he does not wish them to do so, as he says he cannot bear the noise of children. I have written to Josiah. (T.S.R. 32. 2 P.M. 39. S.S. 35.)

Jan. 16. Friday. Still foggy and cloudy in the forenoon. Susie came in and said goodbye this morning. She and Lucy have looked over mother's belongings and packed one bundle for her sister in New Hampshire and another for Mrs. Taylor of San Diego. (T.S.R. 32. 2 P.M. 40. S.S. 37.)