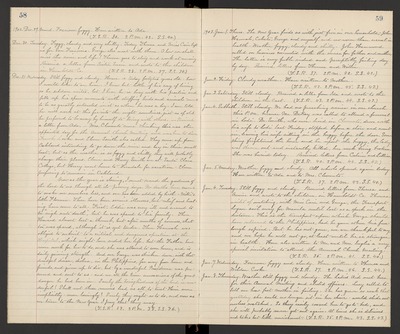 Dec. 30. Tuesday. Foggy, cloudy and very chilly. Today Theresa and Miss Cain left us for San Francisco. George also went with them. O how we shall miss the noise and life! Theresa goes to stay and work at nursing Received a letter from Sister Susie and wrote to the children in Humboldt Co. (T.S.R. 28. 2 P.M. 37. S.S. 34.)

Dec. 31. Wednesday. Still foggy and cloudy. Horace is today forty two years old - how I would like to see him. I know but little of his way of living as he seldom writes, but I hear he is busy with his practice and fills up his spare moments with stuffing birds and animals - seems to be as greatly interested in it as when he was a boy. I am told he will work at this far into the night sometimes, just as of old he prepared to be away by himself to being with others. - Received a letter from Ada. - Mrs. Clements came thinking this was the appointed day for the Annual Church meeting and was here to dine. Frank Locke and Elmer Smith also called. They came up from Oakland intending to go down the river and bay in their small boat, but as the weather is so foggy and chilly they will probably change their plans. Elmer and Harry Smith are at Santa Clara College, but Harry went home to Ferndale for vacation - Elmer preferring to remain in Oakland. Now as the year is closing, I must record the goodness of the Lord to us through all its passing days. No deaths have occurred to make our numbers less, and one has been added by birth - Willie's little Florence. There have been serious illnesses, but relief and healing have come to all. First, Eddie was very ill and seemed to be "nigh unto death", but he was spared to his family. Then Howard almost lost a thumb, but after months of soreness, that too, was spared, although it is yet tender. Then Hannah was obliged to submit to a critical and dangerous operation at the Hospital, which might have ended her life, but the Father had more work for her to do, and she was allowed to come home, and is daily gaining strength. And our George was stricken down with that dreadful disease, cholera, in the Philippines, far away from home and friends, and given up to die, but by a wonderful Providence was preserved and sent to us - and we all the time unconscious of the great danger he had been in. Surely the loving kindness of the Lord is wonderful! Shall not these mercies lead us all to trust Him more implicitly more lovingly? Surely they ought so to do, and now as we turn to the New Year I pray that they may. (T.S.R. 33. 2 P.M. 38. S.S. 36.)

1903. Jan. 1. Thurs. The New Year finds us with just five in our household; John Hannah, Celeste, George and myself, and no worse than usual in health. Weather foggy, cloudy and chilly. John Hammond called on business connected with the nurse for father and mother. The latter is very feeble indeed and perceptibly failing day by day. Received letters from Theresa and Willie. (T.S.R. 37. 2 P.M. 42. S.S. 42.)

Jan. 4. Sabbath. Still cloudy. We had no preaching service in our church this P.M. because Mr. DeKay was called to attend a funeral in Lodi. Dr. Smith, who once lived in Clements, drove with his wife to Lodi last Friday. Stopped before a store and went in, leaving his wife sitting in the buggy before the door. Something frightened the horse and he upset the buggy, the lady was thrown out and instantly killed, her neck being broken. She was buried today. Received letters from Calvin and Lillian. (T.S.R. 40. 2 P.M. 44. S.S. 43.)

Jan. 6. Tuesday. Still foggy and cloudy. Received letters from Theresa and Eunice and wrote to the children in Humboldt Co. Theresa writes of watching, with Miss Cain and George, the Transport Logan sail away for Manila until last as a speck in the distance. This is the transport upon which George should have returned to the Philippines, had he gone when his furlough expired. But he has not gone, we are thankful to say and we hope he will not go, at least until he is stronger in health. Have also written to Mr. and Mrs. Ingles a very special invitation to attend the Annual Church Meeting. (T.S.R. 35. 2 P.M. 41. S.S. 40.)

Jan. 8. Thursday. Weather still foggy and cloudy. The Ladies Aid met here for their Annual Meeting and elected officers. Lucy called to tell me how fast Mother is failing. She has grown so weak that yesterday she could no longer sit in her chair - would slide out unless watched. So they easily coaxed her to go to be, and she will probably never get out again. At times she is delirious and takes but little nourishment. (T.S.R. 35. 2 P.M. 43. S.S. 43.)