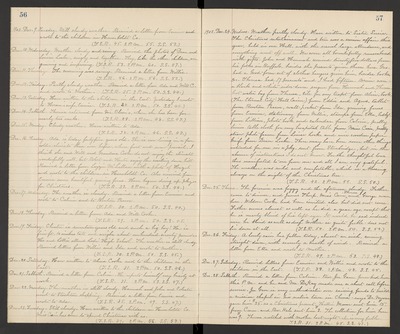 Dec. 16. Tuesday. Ada is today fortyfive years old. She is now living in a far colder climate than ever before, where frost and snow prevail. I think she and Will and Grandma Cooke do not enjoy the climate wonderfully well, but Robert and Hester enjoy the coasting down hill. Received a letter from Lizzie McLellan with a photo of Hazel and wrote to the children in Humboldt Co. Also received from Eunice some beautiful growing ferus. Have begun doing up pkgs. for Christmas. (T.S.R. 33. 2 P.M 50. S.S. 46.)

Dec. 19. Friday. Chester is seventeen years old and such a big boy! He is five ft. 10 inches tall and weighs about one hundred seventy pounds. He and Lottie attend Lodi High School. The weather is still cloudy. Received letters from Willie and Ida and wrote to Mother. (T.S.R. 30. 2 P.M 50. S.S. 45.)

1902. Dec. 24. Wednes. Weather partly cloudy. Have written to Sister Susie. The Christmas entertainment and tree was a union affair this year, held in our Hall, with the usual large attendance, and everything went off well. We were all bountifully remembered with gifts. John and Hannah received twenty five dollars from his folks in Buffalo, besides the presents given them here. Geo. had a Good-form set of clothes hanger given him, besides books, D.C. Theresa had 17 presents and I had fifteen. Mine were - a black and white cider-down pasque from Hannah and Theresa hot water bag from Theresa, tile for my teapot from Alice, book (The Eternal City - Hall Caine) from Eddie and Agnes, tablet from Benton Pascoe, wall-pocket from Ida, growing ferns from Eunice, stationery from Nellie, stamps from Etta, hdkf. from Lillian, photo book and calendar from Calvin, pretty linen table cloth for my hospital table from Miss Cain, pretty straw photo frame from Louise Locke and nice wooden paper knife from Dean Locke. There may have been some other things intended for me in a pkg. sent from Sturbridge, but in the absence of instruction I do not know. For the thoughtful love thus manifested to me from one and all I am very grateful. The weather was mild and comfortable, which is a blessing always on the night of the Christmas tree. (T.S.R. 42. 2 P.M. 55. S.S. 50.)

Dec. 25. Thurs. The forenoon was foggy and the afternoon cloudy. Father came to dinner, and James Thorp, Miss Cain Theresa and George were here. Weldon Cooke had been invited also but did not come. Father seems almost as well as he did a year ago, except that he is nearly blind of his left eye. It would be sad indeed were he blind as well as deaf. Mother is quite feeble does not lie down at all. (T.S.R. 54. 2 P.M. 50. S.S. 52.)

Dec. 28. Sabbath. Received a letter from Calvin. Rev. Jee Gam preached here this P.M. and he and Mr. DeKay made me a short call before service. Jee Gam is his enthusiastic over raising funds to build a mission chapel in his native town in China - says Dr. Mooar gave him $25. as a Christmas present Hattie Mooar sent him $15. from Conn. and Rev. Hale sent him $3. The collection for him here was $9. Theresa watched with mother last night - she is very feeble. (T.S.R. 31. 2 P.M. 45. S.S. 41.)