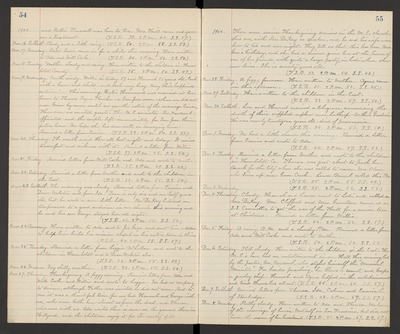 Nov. 19. Wednesday. North windy. Willie is today 37 and Hannah 35 years old. Each with a home and child, and each very busy. May their happiness continue!_ This morning, Bertie Hammond was married at her home to Thomas Rogers Thurber - a San Jose man - whom we did not even know by name until we saw the notice of the marriage license. There were no invited guests. The M. E. minister - Rev. Newcomb - officiated - and the couple left immediately for San Jose, their future home. We hope she has done well in marrying him. Received a letter from Eunice. (T.S.R. 33. 2 P.M. 54. S.S. 51.)

Nov. 23. Sabbath. The morning was cloudy. Received letters from Eunice and Dean Webster and from Ida. Dean is only six and one-half years old, but he wrote a nice little letter. Rev. DeKay lectured on temperance to a good audience in our church this evening and he and his son George stayed here all night. (T.S.R. 42. 2 P.M. 56. S.S. 50.)

Nov. 27. Thursday. Thanksgiving. A foggy morning. Received letters from Ada and Will Cooke and Willie and wrote to Lizze. We had no company to dinner, although Father was invited he did not come. But to me it was a thankful time, for we had Hannah and George with us, who were both here almost as from the dead, and Theresa also was with us. Ada writes there is snow on the ground there in Hillyard, and the children enjoy it for the novelty of it.

1902. There were union Thanksgiving services in the M.E. church this eve, with Rev. DeKay as speaker, and he and his wife were here to tea and over night. They tell us that this has been Mrs. Gove's birthday, and she had a dinner given her at the house of one of her friends, with quite a large party, in Lodi where she now lives. She is seventy years old. (T.S.R. 33. 2 P.M. 54. S.S. 48.)

Nov. 30. Sabbath. Lou and Howard received a telegram announcing the death of their crippled nephew near Lathrop - Arthur Goodwin He was nearly twenty one years old - died of pneumonia. (T.S.R. 34. 2 P.M. 53. S.S. 50.)

Dec. 2. Tuesday. Received a letter from Mother and wrote to the children in Humboldt co. Theresa was just about to pack her trunk for the City, when she was called to nurse Mrs. Olsen who lives up near Goose Creek. Laura Bruml called this P.M. (T.S.R. 35. 2 P.M. 55. S.S. 49.)

Dec. 6. Saturday. Still cloudy. Have written to the children in the East. The M.E.'s have had an entertainment in our Hall this evening led by the pastor, Mr. Newcomb, who styles himself the "Musical Minister". For besides preaching, he blows a cosnet, and keeps a jewelry shop. Hannah and Agnes helped in the entertainment and tired themselves all out. (T.S.R. 45. 2 P.M. 60. S.S. 57.)