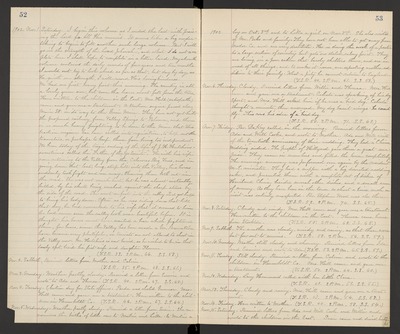 1902, Nov, 1. Saturday. I begin this volume as I ended the last with praising the Lord for all His mercies. It seems like a big undertaking to begin to fill another such large volume. But "I will go in the strength of the Lord Jehovah", and what I do not complete here I shall hope to complete in a better land. My eleventh volume contains the daily records of four years and ten months. I would not try to look ahead as far as that, but day by day, as He giveth me strength, I will record His loving kindness. We had our first heavy frost this morning. The country is all a lovely green now, but soon the leaves must fall from the trees. Have written to the children in the East. Mrs. Hill (osteopath) came and gave me a treatment. A traction engine passed along Main St. on its way to the Irvin Mine. They have not yet built the proposed railway from Valley Springs to Paloma, and there is so much heavy freighting to be done to the Mine that this traction engine has been called into requisition, to help out the teamsters, or perhaps to keep them from being too independent. We hear today of the tragic ending of the life of J. H. Hutchins - sometimes called the "Father of the Yo Semite". He with his wife were returning to the Valley from the Calaveras Big Trees, and in going down that last, long, steep hill into the Valley, his horses suddenly took fright and ran away, throwing them both out in the road. She was not much hurt, but he was almost instantly killed, by his skull being crushed against the sharp stones by the side of the road. She went on foot into the valley and got help to bring his body down. Often as he was riding down that hill that day, he had remarked to his wife that it seemed to him he had never seen the valley look more beautiful before. It is thought his horses must have scented a bear which frightened them, for bears, since the Valley has been made a Gov. Reservation have became very plentiful, as tourists are not allowed to shoot in the Valley now. Mr. Hutchins is now buried, as he wished to be, in that lovely spot, beside his first wife and daughter Florence. (T.S.R. 33. 2 P.M. 66. S.S. 58.)

Nov. 5. Wednesday. Weather partly cloudy. Received a letter from Susie. She announces the births of little ones to Mertice and Lilla to Mertice a

1902 boy on Oct. 3rd and to Lilla a girl on Nov. 3rd. She also writes of Mr. Perks and family. They have not been able to get away from Modoc Co. and are very destitute. He is doing the work of a pastor to a large section of country but gets no stated salary for it. They are living in a poor cabin that barely shelters them, and are in need of all things, and to make it worse, are expecting another addition to their family. What a pity he cannot return to England. (T.S.R. 40. 2 P.M. 61. S.S. 58.)

Nov. 7. Friday. Rev. DeKay called in the morning. Received letters from Ada and Will Cooke and wrote to Mother. Ada and Will write of the twentieth anniversary of their wedding. They had a "China Wedding" indeed. The people of Hillyard gave them a great surprise. They came in numbers and filled the house completely. The marriage ceremony was performed over again by the resident M.E. minister. They had a supper with a big decorated wedding cake, and presented them with a complete set of dishes of Haviland China, besides several other dishes, and a small sum of money. As they have been in the town so short a time such a visit was entirely unexpected. Rev. Stephen Wood was also there. (T.S.R. 52. 2 P.M. 74. S.S. 65.)

Nov. 15. Saturday. Received letters from Ada and Will Cooke and Willie and wrote to the children in the East. Susie came and dined here