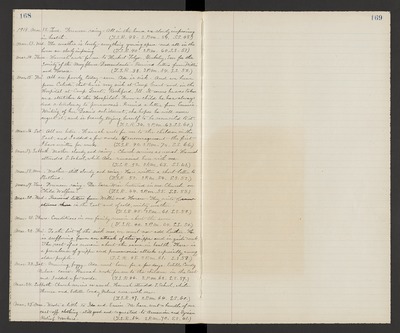 Mar. 15. Fri. All are poorly today - even Ada is sick. And we hear from Celeste. that he is very sick at Camp Grant and in the Hospital at Camp Grant, Rockford, Ill. It seems he was taken on a stretcher to the Hospital. From a child he has always had a tendency to pneumonia. Received a letter from Eunice. Writing of her Dean's enlistment, she hopes he will never regret it, and is bravely trying herself to be reconciled to it. (T.S.R. 36. 2 P.M. 63. S.S. 60.)

Mar. 22. Fri. To the list of the sick ones, we must now add Luther. He is suffering from an attack of he grippe and is quite weak. The rest of us remain about the same in health. There is a prevalence of grippe and pneumonia attacks especially among older people. (T.S.R. 45. 2 P.M. 61. S.S. 58.)