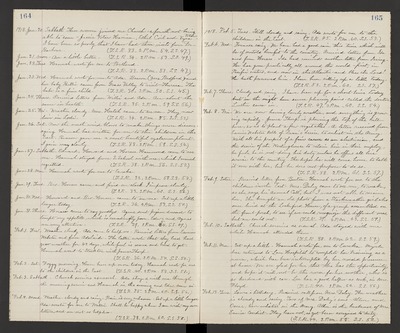 Feb. 6. Wed. Forenoon rainy. We have had a good rain this time which will be of untold benefit to the country. Received letter from Ida and from Horace. Ida had received another letter from Irving. He has gone practically all around the world - first, in Pacific waters, and now in the Atlantic - and bless the Lord! He hath preserved him. I have been sitting up a little today. (T.S.R. 52. 2 P.M. 60. S.S. 57.)

Feb. 8. Fri. We are now having lovely weather. and everything is growing rapidly. James Thorp is plowing the top of the hill here, so as to plant a few vegetables - A letter received from Eunice Webster tells of Dean's desire to enlist in the Army. With all his prospect of a fine career as an electrician, and the desire of the Westinghouse to retain him in their employ, he feels he is not doing his duty unless he offers all his service to the country. She hopes he will come home to talk it over with her, but he does not propose to do so. (T.S.R. 38. 2 P.M. 61. S.S. 57.)

Feb. 9. Satur. Received letter from Benton - Hannah wrote for me to the children in the East. Mrs. Daley came to see me, to make, as she says, her "Annual Call", but I was not able to receive her. She brought an old photo from a Starkweather girl who once lived at the Lockeford House, of a group assembled on the front porch, to see if we could recognize the different ones, but we could not. (T.S.R. 39. 2 P.M. 63. S.S. 59.)

Feb. 11. Mon. Sat up a little. Hannah wrote for me to Eureka. Myrle has returned to Lane Hospital to complete her training as a nurse, which has been interrupted by her needed presence at home - We are glad for her that she has the opportunity, and hope it will not be the worse for her mother, who is so burdend with care. Lou has a good helper as cook, in Mrs. Floyd. (T.S.R. 40. 2 P.M. 62. S.S. 56.)