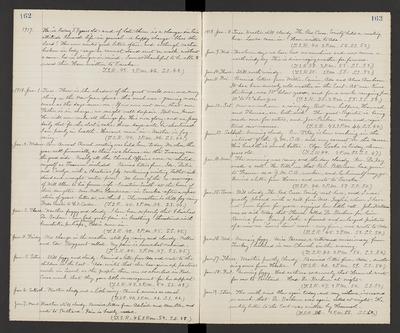 1917. He is today 57 years old - and of late there is a change in his attitude towards life in general - a happy change - bless the Lord! He now writes good letters often, and although rather broken in body - says he cannot stand erect or walk without a cane, he is stronger in mind - I am so thankful to be able to record this. Have written to Eureka. (T.S.R. 45. 2 P.M. 46. S.S. 44.)

1918. Jan. 1. Tues. There is the shadow of the great world war over every thing as the New Year opens - this cruel war - growing more cruel as the days move on - If we were not sure that our Father is in charge, we might well despair. But we know He will over-rule all things for His own glory, and we pray daily that "for the elect's sake these days will be shortened. I am poorly in health. Howard came in - Weather is fog-rainy. (T.S.R. 44. 2 P.M. 46. S.S. 46.)

Jan. 2. Wednes. Our Annual Church meeting was held here today. We close the year well financially as there is a balance in the Treasury on the good side. Nearly all the Church Officers more we elected, myself as Treasurer included Received letters from, Ida, Delia and Carolyn, with a Christmas pkg. containing writing tablet-ink, stand and wrought center-piece. We learn of the re-marriage of Will Allen to his former wife - Ernestine Smith - at the home of their daughter - Mrs. Nellie Henderson - in Eureka - after a separation of years - better so, we think. The weather is still fog-rainy - Freda Dustin to H.V. Cowder. (T.S.R. 40. 2 P.M. 43. S.S. 44.)

Jan. 5. Satur. Still foggy and cloudy. Received a letter from Ada and wrote to the children in the East - Ada writes that she has given up pastoral work in Sunol as the people there are so absorbed in Red Cross work that they gave little encouragement for her support. (T.S.R. 43. 2 P.M. 50. S.S. 48.)

Jan. 15. Tues. Still cloudy - The Red Cross Society met here, and I was greatly pleased with a call from Mrs. Inglis, whom I have not seen before for years - enjoyed her little call - John Willard was so sick today that Theresa called Dr. Barbour for him. Received from Dean J. Locke a framed and enlarged picture of a view on "Lovers Lane" road - very fine, and wrote to Ada. (T.S.R. 45. 2 P.M. 52. S.S. 50.)