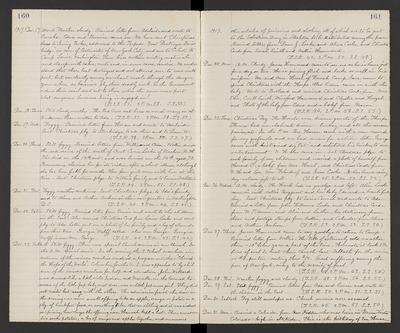 1917. Dec. 17. Mond. Weather cloudy. Received letter from Adelaide and wrote to Eureka. Edna and Bernice came in. We have sent Christmas box to Irving Parker, addressed to the Torpedo - Boat Destroyer "Bain bridge" in care of Postmaster of New York City, and one to Celeste to Camp Lewis, Washington. These boxes contain writing materials and stamps, with cakes, nuts and, in some cases, candies. We under stand that these boat-destroyers and not allowed ever to come into port, but constantly convoy, merchant vessels through the danger zone where submarines ply their deadly work. So the Government orders their mail sent out to them when the come near port. What dangerous business Irving is engaged in! (T.S.R. 51. 2 P.M. 58. S.S. 55.)

Dec. 20. Thurs. Still foggy - Received letters from Willie and Ada - Willie sends the sad news of the death of Aunt Carrie Locke of Nashua, N. H. She died on the 14th inst. and was buried on the 16th, aged 73. Pneumonia claimed her for its victim, after a short illness, although she has been feeble for months. Her four girls were with her at the time. Sent Christmas pkgs. to Willie's family and to Eunice Webster's. (T.S.R. 44. 2 P.M. 51. S.S. 48.)

Dec. 22. Satur. Still foggy Received letter from Eunice and wrote to the children in the East. Also received Christmas Card from Louise Locke and sent pkg. to Ada. Lottie sent us a photo of her family and a bag of almonds from their trees. Georgia Wulff called - also our George. Georgia Wulff is now Mrs. George. (T.S.R. 40. 2 P.M. 45. S.S. 44.)

Dec. 23 Sabbath Still foggy. There were special Church Services in our Church. In the A.M. Special music - In the evening the S. School members in costume of the various countries rendered a program entitled - "Christ the Hope of the World". Columbia, for the U.S. was appealed to by children of the various countries for help and education. John Willard was dressed like a little wild Indian, and Marcella, in the borrowed kimona of the little Jap baby next door, was a little Japanese girl. They did not recite but song with the others. The admission fee at the door in the evening was some small offering like an apple, orange or potato or a pkg. of breakfast food, or something like that or clothing and it was indeed surprising, how large the offering was. Hannah kept a list. There were over two sacks potatoes, a box of oranges and apples together, and numerous

1917. other articles of provisions and clothing, all of which are to be sent to the Salvation Army in Stockton to be distributed among the poor. Received letters from Dean J. Locke and Alma Cooke, and Christmas Cards from Sarah Smith and Nellie Hannah. (T.S.R. 42. 2 P.M. 50. S.S. 48.)

Dec. 24. Mon. A.M. Cloudy. James Hammond came to see us a he is home just for a day or two - He is gaining flesh and looks so well in his uniform - Mr. and Mrs. Hoerl of French Camp have come to spend Christmas with the Thorps. Also Edna come in with the baby - Wrote to Portland and received Christmas Cards from Mrs. Ober, Corell Smith, Winifred Hammond and Chester and hazel and Photo of the baby from Edna and a hdkf - from Beacon. (T.S.R. 46. 2 P.M. 58. S.S. 55.)

Dec. 25. Tues. Christmas Day - The Hoerls were dinner guests of the Thorps - Theresa had an elaborate dinner - turkey and all the accompaniment. In the P.M. - Bro. Horace came with a new record for my grafonola and we had music for a while. Later, George came with his trained dog "Pat" and exhibited his tricks, to our entertainment - N.H. also came in - Sent Christmas pkgs. to each family of my children and received a photo of himself from Howard C. - a hdkf. from Mrs. Hoerl, and Christmas Cards from N.H. and Lou, Mrs. Folendorf and Irene Cooke. It has been a rainy day - welcome gift to all. (T.S.R. 45. 2 P.M. 50. S.S. 52.)

Dec. 26. Wednes. A.M. cloudy - The Hoerls bade us goodbye and left - Alice Locke came in with Nellie Bergquest and her baby Edward - a beautiful boy. Sent Christmas pkg. to Susie Cornish and wrote to Ada - Received a letter from John Fillmore Locke and Christmas Cards from W.P. Moore, and Alice and Luther, box stationery from them and postage stamps from Nellie, and Calendar from Alma and Arthur Ambrose. (T.S.R. 52. 2 P.M. 52. S.S. 50.)

Dec. 31. Mon. Received a Calendar from Rev. Kidder who now lives in Buena Vista Colorado - high in altitude. This is the birthday of Son Horace,