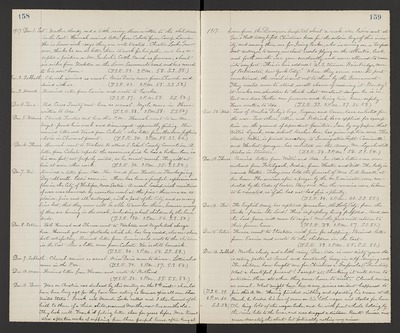 1917. Dec. 1. Sat. Weather cloudy and a little rainy. Have written to the children in the East - Hannah received letter from Celeste from Camp Lewis - He is home-sick - says they are well treated - Chester Locke, however, thinks he can do better than to work for his father, and has accepted a position on Mr. Gerlach's Cattle Ranch as foreman, about six miles from Stockton on the Lower Sacramento road and has moved to his new home. (T.S.R. 52. 2 P.M. 58. S.S. 55.)

Dec. 6. Thurs. Hannah went to Stockton to attend S. School County Convention. A letter from Celeste reports the examiners find he has a broken bone in his sore foot, not properly united, so he cannot march. They will set him at some other work. (T.S.R. 36. 2 P.M. 55. S.S. 52.)

Dec. 7. Fri. Received a letter from Ada - She heard from Hester on Thanks giving Day - all well. Eddie came in There has been fearful explosion and fire in the City of Halifax, Nova Scotia. A vessel loaded worth munitions of war was rammed by a smaller vessel at the pier - there was an explosion, pier and all destroyed with a part of the City, and so many lives lost, that they never will be able to number them, because many of them are burning in the wreck, including school children by the hundreds. (T.S.R. 36. 2 P.M. 56. S.S. 50.)

Dec. 8. Satur. Both Hannah and Theresa went to Stockton and Myrle took charge here. Hannah got new spectacles, which she has long needed, also new shoes, both satisfactory. Received letter from Eunice and wrote to the children in the East - also a letter came from Celeste. He is still homesick. (T.S.R. 34. 2 P.M. 56. S.S. 53.)

Dec. 11. Tues. War on Austria was declared by this country on the 8th inst. should have been long ago. for they have been acting as German spies all over those United States - Frank and Mande Locke called and I then learned of the birth to them of a third child, named Martha, now two month old - They look well. Frank is filing better than for years before Mrs. Russell died after ten weeks of suffering from those fearful burns, after bring at

1917. home from the Dameron hospital about a week. The ladies met at Geo.'s Hall today to fill Christmas boxes for the soldier boys of this vicinity, and among them one for Irving Parker, who is serving on a torpedo boat destroyer, to convoy merchant vessels plying on the Atlantic, back and forth over the war zone constantly, and never allowed to come into any port. This is his address: "U.S. Steamer Bainbridge, care of Postmaster, New York City." When they arrive near the port mentioned, the mail is sent out to them by the Government. They would seem to stand small chance of receiving it. Poor boy! it makes one shudder to think what constant danger he is in - But our dear Father can preserve and bring him home safely - Have written to Ada. (T.S.R. 33. 2 P.M. 57. S.S. 53.)

Dec. 12. Wed. Two of Amelia Daley's boys, Eugene and Oscar, have enlisted for the war - Two others, Allen and Roderick, have applied for exemption on the ground of dependent families. I see by my proper that Willis Lynch, ones school teacher here, has given up two sons. The oldest, Willis, is private secretary to Immigration Supt. Caminetti, and Herbert, younger, has enlisted in the Army. Mr. Lynch still teaches in Stockton. (T.S.R. 34. 2 P.M. 58. S.S. 54.)

Dec. 13. Thurs. Received letters from Willie and Ada - In Ada's letter was one enclosed from Fatchgarh, India, from Hester and Will. The baby is named Hester. Today was held the funeral of Mrs. E.A. Russell at her home. The services, after a prayer by the M.E. minister, were conducted by the Order of Eastern Star, and then the remains were taken to be cremated, as if she had not had fire a plenty. (T.S.R. 34. 2 P.M. 60. S.S. 55.)

Dec. 16. Sabbath. Weather cloudy and a little rainy. Dear Ada is now sixty years old is acting pastor at Sunol and constantly busy in self - denying work. The children have bought me for Christmas a Grafonola (Columbia). What a beautiful present! I accept it, thinking it will serve to entertain them all when they come home to visit. Church services as usual. What might have been a very serious accident happened to Jim this A.M. Having finished milking and separating his cream at the Ranch, he loaded his can of cream on his little wagon and started for home. The king-bolt of the wagon broke, and he, with front wheels, holding by the reins, held to the horse, and was dragged a distance. Result bruises, and cream decorating the street - but fortunately nothing very serious. (T.S.R. 39. 2 P.M. 60. S.S. 58.)