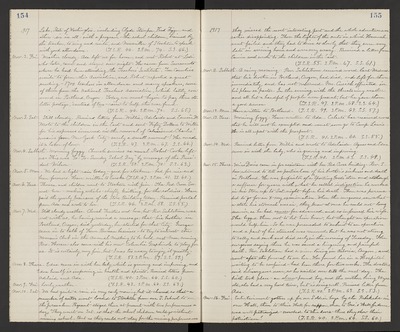 Nov. 2. Fri. Weather cloudy - Ada left us for home, and met Robert at Lodi who later, came and stayed over night - He came from Sacramento where he had been attending the Teacher's Institute. Ten Counties write to form this Association, and Robert reported a great meeting - 1700 teachers in attendance and many speakers, some of them from the National Teachers Association, which lately convened in Portland, Oregon. Today we must begin to pay three cts. letter postage, instead of two - raise to help the war fund. (T.S.R. 46. 2 P.M. 72. S.S. 65.)

Nov. 3. Sat. Still cloudy. received letters from Willie, Adelaide and Eunice W. Wrote to the children in the East and sent Fifty Dollars to Willie for his expenses incurred in the removal of Calvin's and Charles', remains from New York City surely - a small amount! He made it a labor of love. (T.S.R. 47. 2 P.M. 67. S.S. 66.)

Nov. 6. Tues. Theresa and children went to Stockton with Jim - The Red Cross Soc. met here - making articles - chiefly knitting for the soldiers. Have paid the yearly Insurance of the Store Building today. Received postal from Ada and wrote to her. (T.S.R. 46. 2 P.M. 58. S.S. 55.)

Nov. 7. Wed. Still cloudy weather. Church Trustees met here , but Rev. Sahlstrom was not with us, he having received a message that his brother in Portland, Oregon died yesterday, he started for that City. George came in in to talk of Farm Bureau business - to try to interest the Woman's Club in the annual Meeting to be held next Mon. evening. Bro. Horace also came with his new Columbia Graphinola to play for us. It is certainly very fire, but I was too weary to enjoy it greatly. (T.S.R. 51. 2 P.M. 59. S.S. 59.)

Nov. 10. Sat. We had quite a rain in very early morning, but it cleared so that a number of autos went loaded to Stockton from our S. School to see the "Jerusalem Pageant" staged there at present with two performances a day. They went on Sat. so that the school children could go without missing school - But as they could not stay for the evening performance

1917. they missed the most interesting part and the whole adventure was rather disappointing. Then the lights on the auto in which Hannah went failed and they had to drive so slowly that they were very late in arriving home and were very weary. Received a letter from Eunice and wrote to the children in the East. (T.S.R. 55. 2 P.M. 67. S.S. 61.)

Nov. 11. Sabbath. A rainy morning. Rev. Sahlstrom received word last Wednes. that his brother in Portland, Oregon, had died, and left for there immediately, and has not returned. Mr. Cusick officiated in his place as pastor. In the evening, with the threatening weather and all, but a handful of people were present, but he gave them a good sermon. (T.S.R. 47. 2 P.M. 68. S.S. 64.)

Nov. 15. Thurs. Miss Davis came in assistance with her Red Cross knitting - Rev. S - has returned to tell us particulars of his brother's sickness and death in Portland. He was proprietor of a "Sporting Goods" store and although a sufferer for years with what he called indigestion he worked in his Store up to Sat. night before his death. Then was persuaded to go for an X-ray examination. When the surgeons saw what a state his stomach was in, they knew at once he could not long survive, as he had cancer for advanced, and so informed his wife. She begged them not to let him know, but thought an operation would help him. So he was persuaded to submit to an operation and a part of his stomach was removed, but he was not strong to rally and sank and died early in the morning of Tuesday. The surgeons saying thus he was saved a lingering and painful death. Rev. Sahlstrom had a niece living in Astoria, Oregon, and went after the funeral to see her - He found her in a Hospital waiting to be confined - had been there for two weeks. The doctors said delivery was near, so he waited over till the next day. The birth took place - an eleven-pound boy, and the mother being 30yrs. old, she had a very hard time, but is doing well - Received letter from Ada. (T.S.R. 40. 2 P.M. 63. S.S. 53.)