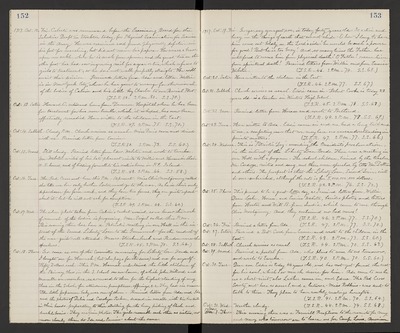 1917. Oct. 12. Fri. Celeste was summoned before the Examining Board for the Selective Draft in Stockton today, for Physical Examination for Service in the Army. He was examined and found physically defective in his feet for marching, but did not receive his papers - He wears a brace upon one ankle, where he is weak from sprain, and the great toe on the other foot has had an ingrowing nail for a year or two, which refuses to yield to treatment, so he does not walk perfectly straight. He will await their decision. Received letters from Ada and Etta. Willie is in New York City, where he has gone to arrange for the removal of the bodies of Calvin and his little boy Charles to our Burial Plot. (T.S.R. 52. 2 P.M. 80. S.S. 70.)

Oct. 17. Wed. The silver plate taken from Calvin's casket arrived, so we know the work of removal of the bodies is progressing. Mrs. Siegel called this P.M. This evening there has been a Patriotic meeting in our Hall in the interest of the Second Liberty Loan to the Government for the conduct of the war - quite well attended. Messrs. Stuckenbruck and Rendon were the speakers. (T.S.R. 45. 2 P.M. 70. S.S. 64.)

Oct. 18. Thurs. Geo. came as one of the Committee canvassing for Liberty Loan Bonds and I bought one for Hannah (but she pays for the same) and on for myself Fifty Dollars each. This P.M. Hannah entertained the little children of the Primary class in the S. School on our lawn, of which John Willard and Marcella are members, as a reward to them for the highest standing of any Class in the School, for attendance, promptness, offerings, &.c. They had ice cream. The little Japanese baby was one of them. Received letters from Ada and Ida. and the photos of Delia and Carolyn Parker, dressed in overalls, with tin buckets in their hands, preparatory to this starting for the berry picking of black and huckleberries. They are fine photos. The girls resemble each other as sisters, no more closely than do Ida and Eunice - about the same.

1917. Oct. 19. Fri. George my youngest son, is today forty years old. So active and busy in the things of earth that cannot abide - O how I long to have him came out boldly on the Lord's side! he would be such a power for good! But he is too busy! And so many times that Father has interfered to rescue him from Physical death! O Father! rescue him from spiritual death! Received letters from Willie and from Eunice Webster. (T.S.R. 46 2 P.M. 74. S.S. 63.)

Oct. 24. Wednes. This is "Patriotic Day" - according to the President's proclamation, in the interest of the Liberty Loan Bonds. There was a meeting in our Hall with a program. The school children, trained by the teacher Mr. Cardoza. recited and sang, and there were speeches by Otto Von Detten and others. "The prospect is that the Liberty Loan, Second Drive, will be over subscribed, although the call is for 5,000,000,000 dollars. (T.S.R. 42 2 P.M. 76. S.S. 72.)

Oct. 25. Thurs. This proved to be a great letter day, as I received letters from, Willie Dean Locke, Horace, and Eunice Webster, besides photos and letters from Hester and Will B - from India, which came to me through Olive Montgomery and they contained no bad news! (T.S.R. 46 2 P.M. 77. S.S. 70.)

Oct. 30. Tues. Dear son Eddie is today 46 years old, and has not yet found the rest for his soul, which I so much desire for him. Ada came to make us a short visit, also Luther came in, and Edna. The Red Cross Society met here as usual and a lecturer - Miss Robbins - was sent to talk to them. They plan to have weekly meetings hereafter. (T.S.R. 41 2 P.M. 70. S.S. 64.)

Nov. 1. Thurs. This evening there was a Farewell Reception to the recruits for Army and Navy who tomorrow are to leave us for Camp Lewis, American