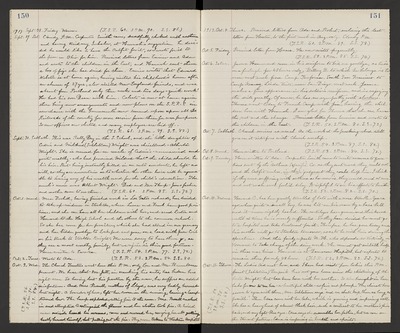 Sept. 29. Sat. Cloudy P.M. Carpenter Smith came, dreadfully choked with asthma and having tired my Inhaler, at Hannah's suggestion he decided he would like to have the Outfit for it, sad wrote for it to the firm in Ohio for him. Received letters from Eunice and Ada and wrote to the children in the East, and Hannah sent them a box of figs she has dried for them. Eunice writes that Edward Webster is at home again, having visited his childhood's home after an absence of 27 yrs, also visited new England friends. and was absent from Portland only three weeks and two days - quick work! He had his son Dean with him. Celeste is now at home again there being new arrangements and new plans on the S.P.R.R. in accordance with the Governments new demand upon all the Railroads of the country for more service from them for was purposes So new officers are elected and many employees are laid off. (T.S.R. 61. 2 P.M. 89. S.S. 82.)

Sept. 30. Sabbath. This was. Rally Day in the S. School, and the little daughter of Cedric and Mildred (Sahlstrom) Wright was christened - Alberta Wright. She is named for an uncle of Cedric's - unmarried and quite wealthy - who had promised Mildred that the child should be his heir. But being instantly killed in an auto accidents, he left no will, so they are uncertain as to whether the other heirs will be agreeable to having any of his wealth used for the child's education. The uncle's name was Albert Wright. Dad and Ma Thorp - Jims father and mother came to see them. (T.S.R. 60. 2 P.M. 85. S.S. 72.)

Oct. 1. Mond. Mrs. Tarbell, having finished work in Los Gatos orchards, has decided to take up residence in Stockton, where Leone and Frank have good positions, and she can have all her children with her, and send Lester and Howard to the High School and the others to the common school. So she has come for her furniture which she had stored in our granary and has bidden goodbye to Lockeford and gone on a load with Jesse Coil on his truck to Stockton tonight. We were sorry to have them go, as they are a most worsty family, but we rejoice in their good fortune. Have written to Eureka. (T.S.R. 54. 2 P.M. 77. S.S. 72.)

Oct. 3. Wed. The Church Trustees met here this P.M. only Lou and Mr. Bruml were present. We hear that Mr. Jett, in cranking his auto, has broken his right arm. So having lost his partner by the war, he suffers an added misfortune. And Mrs. Russell, mother of Lloyd, was very badly burned last night. A boarder of hers, left her room in the evening, leaving a lamp turned low. The lamp exploded, settling fire to the room. Mrs. Russell rushed in and attempted to extinguish the flame and her clothes took fire. A hired man outside heard her screams, came and rescued her, carrying her out getting badly burned himself, but putting out the fire. They were taken to Stockton Hospital. (T.S.R. 56. 2 P.M. 90. S.S. 84.)

Oct. 6. Satur. James Hammond came in his uniform to bid us goodbye, as he is on a furlough for 48 hours only. Battery B - to which he belongs is to move next week from Camp Tanforan, South San Francisco to Camp Kearny, Linda Vista, near San Diego next week - James makes a fine appearance in his soldiers uniform, and is enjoying the drill greatly. Of course, he has no sympathy with slackers. Theresa went today to French Camp with Jim, Leaving the children here with Hannah. I am glad for Theresa that she can have the rest and the change Received letter from Eunice and wrote to the children in the East. (T.S.R. 50. 2 P.M. 80. S.S. 72.)

Oct. 9. Tuesday. Have written to Ada - Carpenter Smith came to write answers to questions sent by the "Asthma Specific" Co. as they sent word they could not send the Outfit unless, in their judgment they could help him. I think if they were suffering with asthma as he now is, they would send at once and not make such foolish delay. It is pitiful to see his efforts to breathe. (T.S.R. 52. 2 P.M. 82. S.S. 70.)

Oct. 10. Wednes. Howard C. has been greatly troubled of late with a nose trouble. Years ago, when quite a small boy, he was hit on his nose by a base-ball and it never rightly healed. The cartilages have grown and thickened until at times he is nearly suffocated. So they have decided he must go to a hospital and take treatment for it. Therefore he has gone today and his mother will go to Stockton tomorrow, so as to be with him during the operation. And this fairly upsets N.H. who depends so entirely on Howard to take charge of the dairy work. He cannot get suitable help in these war times. Howard is at Dameron Hospital, but expects to remain there for only 48 hours. (T.S.R. 52. 2 P.M. 82. S.S. 76.)

Oct. 11. Thurs. The Ladies Aid met here and I have had visits from babies this P.M. Janet (Sahlstrom) Doupnik has not gone home since the christening of Alberta Wright, but has been here with her mother. So she brought in her babe for me see her - a beautiful child - so fair and plump. The climate here seems to agree with them, Mr. Sahlstrom says, "and we shall keep them as long as possible". Then Edna came with her babe, which is growing and improving well. She has a heavy head of almost black hair, such a contrast to her mother's fair hair, and very light blue eyes. Edna says she resembles her father, but we can see the Stewart features - Edna is improving in health and spirits. (T.S.R. 52. 2 P.M. 75. S.S. 68.)