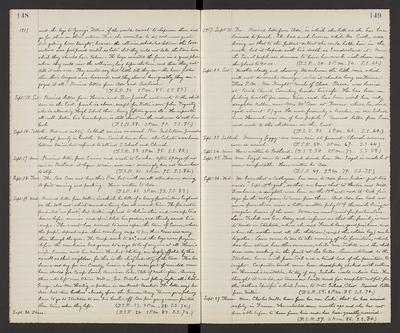 1917. and the boys to Young's Station, if she would consent to chaperone them and go for them on their return. This she consented to do, and were quite late getting home tonight, because the collision scheduled between the locomotives was postponed until so late that they could not take the train home which they should have taken, The boys mounted the fence in a good place where they could view the collision, long before the time, and there they sat till it was over. They would say but little till they saw the home folks, then their tongues were loosened and they showed how greatly they enjoyed it all. Received letters from Ada and Adelaide. (T.S.R. 52. 2 P.M. 85. S.S. 83.)

Sept. 15. Sat. Received letters from Horace and Bro. Josiah and wrote to the children in the East. Josiah is alone, except for Katie's son - John Fogarty - who is attending High School there, being fifteen years old. He reports all - well. Katie his housekeeper, is still absent in the endeavor to sell her book. (T.S.R. 58. 2 P.M. 90. S.S. 81.)

Sept. 19. Wed. Received letter from Willie, in which he tells of a heavy frost in New England on the 10th inst. which caused a heavy loss all around him - The forecaster predicted "no frost," but Willie refused to believe this, and was up two hours before sunrise and sprinkled his garden, and thereby saved his crops. The worst loss seemed to come upon the town of Carver, where the people depend upon their cranberry crops to pay their taxes and carry them through the year. The temp sank to 22-, and the bogs were frozen before the cranberries had grown to a size to be of any use at all. Horace's wife, Eunice, and her cousin Herbert Whiting, are deeply affected by this - as well as their neighbors, for this is the chief industry of the town. This has been a sad day for our County, because a large contingent of recruited men have started for Camp Lewis, American Lake, State of Washington. Among those who left were Oliver Wallace, Geo. Stemler and Johnny Coykendall's brother George, also Mr. Hartig, a partner in our Meat Market - The latter says he has lost two brothers already from the German Army. Theresa gave Johnny have to go to Stockton to see his brother off. One poor young woman fainted three terms when they left. (T.S.R. 57. 2 P.M. 88. S.S. 74.)

1917. Sept. 21. Fri. Received letter from Ada, in which she tells us she has been licensed to preach. She had such license while Mr. Cooke was living. so that to the fullest extent she could help him in the work, but it lapsed with his death, as I understand it. Now the Sunol people are desirous to have her work with them and she plans to do so. (T.S.R. 50. 2 P.M. 74. S.S. 64.)

Sept. 22 Sat. Weather cloudy and showery. We welcome the little rain which will not do much damage unless it should long continue. This P.M. Mr. Knight, Uncle of Chas. Bacon was buried at Brick Church Cemetery beside his wife. He has been in failing health for some times, and has been with his only daughter Nellie, now Mrs. McCrae at Fresno, where he died, aged almost 87 yrs. He was formerly a teacher in our School here Hannah was one of his pupils. Received letter from Eunice and wrote to the children in the East. (T.S.R. 51. 2 P.M. 64. S.S. 60.)

Sept. 26. Wed. We learn that a Cablegram has come to Ada from India - just two words - "Sept. 19th girl", so that we know that Hester and Will Bembower, a daughter was born on the 19th inst. and it took five days for the cablegram to come from there. And Ada has had no news from them since a letter written July 15th, the mails being so irregular because of the war. So now we must wait for particulars. Leone Tarbell was here today and informs us that the family is now to reside in Stockton, where she and Frank have good positions, and where the mother and all the children (except the soldier boy) can be together. Leone came to see to the moving of the furniture, which has been stored here this summer, while Mrs. Tarbell and the children were working in the fruit at Los Gatos - Leone returned to the Stockton home with Jesse Coil and a truck land of the furniture tonight. Carpenter Smith came here, dreadfully choked with asthma on Hannah's invitation, to try if my Inhaler would relieve him. He thought it would, so tomorrow I will send for complete outfit for the "Asthma Specific" which I use, to Mt. Gilead, Ohio. Received letter from Willie. (T.S.R. 55. 2 P.M. 85. S.S. 76.)

Sept. 27. Thurs. Mrs. Charles Miller hear from her son Leslie that he has arrived safely in France. He enlisted some months ago and she has not been able before to hear from him and has been greatly worried. (T.S.R. 57. 2 P.M. 86. S.S. 80.)