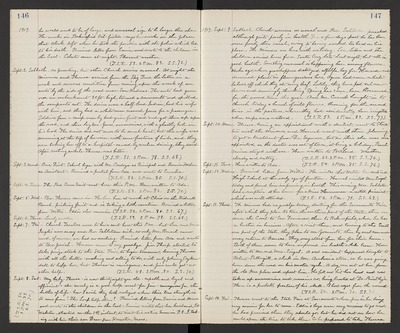 1917. he would need to be of large and unusual size to be larger than she. He works in Bakersfield Oil-fields - says he works in the place that Aleck left when he took the position with the police which led to his death. Received letter from Eunice and wrote to the children in the East. Celeste came at night. Pleasant. weather. (T.S.R. 52. 2 P.M. 83. S.S. 72.)

Sept. 2. Sabbath. No preaching, but other church services as usual. At night the Minners and Theresa arrived from the Big Trees, the latter in a weak and nervous condition from coming upon the wreck of an auto by the side of the road near San Andreas. The auto had gone our an embankment 20ft - high, turned a somersault and spilled the occupants out. The driver was a half-breed Indian, had his wife with him, and they had a white man named Jones for a passenger. Soldiers from a camp near by had given first aid and got sturn up upon the road, and there lay Mr. Jones, unconscious, with a ghastly hole in his head. The driver did not seem to be much hurt, but the wife was screaming at the top of her voice, with some fractures of limbs, and they were taking her off to a hospital - caused by careless driving they said. After resting awhile Theresa was better. (T.S.R. 51. 2 P.M. 78. S.S. 68.)

Sept. 7. Fri. Church Trustees were to have met here this P.M. but Lou and Miss Inglis were away and Rev. Sahlstrom sick, so only Mr. Bruml came and, of course, we had no meeting. Received letter from Ada and wrote to Bro. Josiah - Horace came to say goodbye. Jim Thorp started to take prize stock to the State Fair, to begin tomorrow, leaving Theresa with all the butter-making and selling to do, with only Johnny Coykendall to help her, but Theresa is courageous, and Jim could get no other help. (T.S.R. 48. 2 P.M. 80. S.S. 70.)

Sept. 8. Sat. My baby - Theresa - is now thirtyeight yrs. old, capable and loyal and efficient - she surely is a good help - meet for Jim - courageous for the battles of life - how I wish they both realized where their true strength is to come from! The Lord help them! Received letters from Eunice and Horace and wrote to the children in the East. Eunice writes that her husband. Ed. Webster, started on the 1st instant, to visit his native home in P.E.I. taking with him their son Dean from Worcester, Mass. (T.S.R. 50. 2 P.M. 83. S.S. 70.)

1917. Sept. 9. Sabbath. Church services as usual and Rev. Sahlstrom preached although quite poorly in health. For a few days past he has been more poorly than usual, owing to having worked too hard on his place. The Minners are here with us today. Lou, Lottie and the children arrived home from Santa Cruz late last night, but all in good health. Something unusual is happening her among flowers - Weeks ago, when grasshoppers destroyed alfalfa hay for Howard and denounced plants in flowergardens here, Agnes had some white lalacs, off which they ate every leaf. Lately, they have post out new leaves and seemingly thinking Spring has come, have blossomed for the second time this year. And Mr. Cusick brought in to church today a bunch of wild flowers, blooming for the second time in the pasture, where they had accidently been irrigated when crops were watered. (T.S.R. 53. 2 P.M. 83. S.S. 77.)

Sept. 10. Mon. Theresa, having an appointment with a dentist, went to Stockton with the Minners, and Hannah went with them, planning to get a treatment from Dr. Seymour, but in this she was disappointed, as the doctor was out of town, it being a holiday. Pearl Minner stayed with me. Have written to Portland. Weather cloudy and sultry. (T.S.R. 62. 2 P.M. 85. S.S. 74.)

Sept. 12. Wednes. Received letter from Willie - He writes that Walter has entered High School at the early age of fourteen - Hannah visited Mr. Siegel today and found him improving in health. This evening, Mrs. Sahlstrom held a reception at her house for Miss Hunneman, a noted pianist, which was well attended. (T.S.R. 56. 2 P.M. 79. S.S. 68.)

Sept. 13. Thurs. The Minners bade us goodbye today starting for the Sacramento Fair, after which they plan to tour the northern part of the State, then on down the Coast to San Francisco, then to Bakersfield, where he has a brother in business. After a visit there, and touring to the Southern part of the State, they plan to see Yosemite, then by next summer may return to Kansas. They may start from here for their home. Both of them seem to have improved in health while here. Have written to Mr. and Mrs. Siegel. A sad accident happened tonight to Robert Pettengill, a clerk in Mr. Ambrose's store, as he was going home down the road on his motor-cycle. A dog ran out at him, from the old Kerr place and upset him. He fell and hit his head and was taken up unconscious, and remains so, being treated at Dr. Priestley's. There is a probable fracture of his skull. Blood oozes from the wound. (T.S.R. 54. 2 P.M. 76. S.S. 71.)

Sept. 14. Fri. Theresa went to the State Fair at Sacramento, where Jim is, he being very anxious for her to come. Eddie's boys were very anxious to go and he had promised them they should go, but he did not see how he could spare the trine to take them. So he proposed to take Theresa