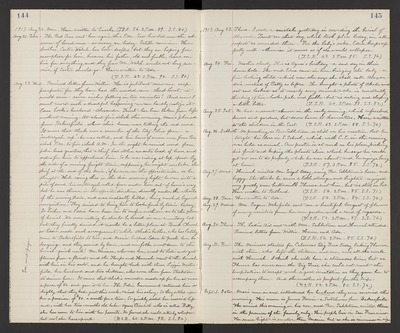 Aug. 21. Tues. The Red Cross met here again this P.M. Sad hearted over the absence of loved ones - so many are today. Estelle came in. Her brother, Carter Walsh, has been drafted, but they are hoping for exemption for him, because his father, old and feeble, leans on him for everything, and they fear Mr. Walsh world not long survive, if Carter should go. Have written to Ada. (T.S.R. 62. 2 P.M. 92. S.S. 80.)

Aug. 22. Wed. Received letter from Willie. He is jubilant now over crop prospects, for they have had the needed rain - cloud-burst, it would seem - seven inches falling in ten minutes! And now I must record such a dreadful happening - we can hardly realize it. Edna Locke's husband - Alexander Trent - has been taken from life without warning. At about five o'clock this morning, Marie phoned from Bakersfield, where their home was, telling the sad news. It seems that Aleck was a member of the City Police force - a "motorcycle cop" - he was called, and his hours of services were from ten o'clock P.M. to five o'clock A.M. In the night, he received word from police head-quarters, that a thief had stolen an auto load of brass, and orders for him to apprehend him. So he was riding at top speed by the side of a moving freight train, supposing he might overtake the thief at the end of the train, if he were on the opposite side, as he thought. While racing thus in the dim morning light, he ran into a pile of sand, his motorcycle rolled from under him out of harm's way but he was thrown in the opposite direction, directly under the wheels of the moving train, and was instantly killed, being crushed beyond recognition. They decided to bring him to Lockeford by train today. So Luther and Eddie have been in to confer with me as to the place of burial. We were willing he should be buried in our cemetery lot but they finally decided it would be a better place at Brick Church so Eddie made such arrangement, while Aleck's brother, who has lately come to Bakersfield to live, and Marie helped Edna to pack her belongings, and they arrived by train, and our folks went down to the burial - quick work! Mr. Minner, who was here, went to Lodi and got flowers from a florist, and the Thorps and Hannah went to the burial with him in his auto, and he brought back with them Lizzie Westerfield, her husband and two children, who were there from Stockton, to dinner here. It seems that Aleck's comrades made up for her at once a purse of $50. and gave it to her. The Police Government esteemed him so highly that they had, just this week, raised his salary. So they settled upon her a pension of $80. a month for a time. So quickly ended her married life and, with her two-months old babe - Agnes Elisabeth - who is called Betty, she has come to live with her parents. We feared she would utterly collapse, but no! she bears up well. (T.S.R. 60. 2 P.M. 93. S.S. 80.)

Aug. 24. Fri. Weather cloudy. This is Agnes's birthday - a sad day in their household. She and Edna came in here bringing the baby - a fine looking child - which now she says she shall call Alexandria instead of Betty as before. She brought a photo of Aleck and sat and looked at it nearly every minute - she is constantly thinking of him - looks pale and feeble - but is eating and sleeping a little better. (T.S.R. 64. 2 P.M. 88. S.S. 82.)

Aug. 26. Sabbath. No preaching as Rev. Sahlstrom is still on his vacation, but he taught his class in S. School, which, with C.E. in the evening was held as usual. Our pastor is at work on his place, picking his fruit and keeping the plants alive, which he says he could get no one to do properly while he was absent, and he enjoys being at home. (T.S.R. 57. 2 P.M. 85. S.S. 72.)

Aug. 31. Fri. The Minners started for Calaveras Big Trees today taking Theresa with them, who left the children, and me, and all the work with Hannah. I think she will have a strenuous time, but as Theresa has never seen the Big Trees, she could not resist the temptation to accept such a good invitation as they gave her to accompany them. And the weather is perfect for the trip. (T.S.R. 52. 2 P.M. 80. S.S. 72.)

Sept. 1. Satur. Marie came in and introduced her husband, they were married this morning. His name is James Fernie - a Scotchman from Bakersfield. He arrived this morning in his car, and Rev. Sahlstrom united them in the presence of the family only. His people live in San Francisco. He seems bright - is smaller than Marie, but as she is immense in size