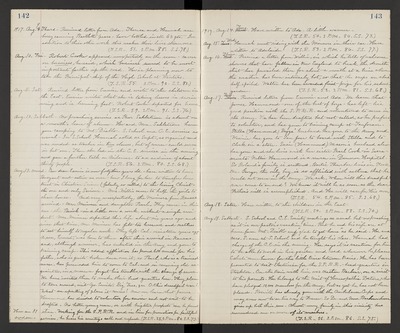 Aug. 10. Fri. Robert Cooke appeared unexpectedly on the scene - came on business, he said, which business seemed to be most important farther rip the road. He is planning now to take the Principal-ship of the High School at Winters. (T.S.R. 55. 2 P.M. 92. S.S. 82.)

Aug. 11. Sat. Received letter from Eunice and wrote to the children in the East. Eunice writes that she is taking lessons in swimming and is learning fast. Robert Cooke departed for home. (T.S.R. 59. 2 P.M. 91. S.S. 76.)

Aug. 12. Sabbath No preaching services as Rev. Sahlstrom is absent on a month's leave of absence - He and Mrs. Sahlstrom have gone camping to Mt. Diablo. S. School and C.E. services as usual - In S. School, Hannah acted as Supt., as organist and was needed as teacher in two classes, but of course could serve in but one. The she led in the C.E. services in the evening and gave a further talk on Asilomar to an audience of about thirty people. (T.S.R. 56. 2 P.M. 80. S.S. 68.)

Aug. 13. Mond. Our dear Eunice is now fortythree years old - have written to her. Buoyant and active as ever - how I long for her to transfer her trust in Christian Science (falsely so called) to the living Christ - the one and only Saviour. Mrs. Willis came to help the girls to clean house. And very unexpectedly, the Minners from Kansas arrived - Mr. Minner and daughter Pearl. They came in their car - the Buick - in a little over a week, without a single accident. Mrs. Minner departed this life about six years ago and since that time, Mr. Minner has felt too bereaved and restless to set himself to regular work. They left Cal. nineteen years ago. A son, Ernest, was born to them after their arrival in Kansas, and, although a minor, has enlisted in the Army and gone to training camp. This added affliction has proved too much for his father, who is quite broken down over it, so Pearl, who is a trained nurse, has persuaded him to come to Cal. and in renewing old acquaintees, in a measure forget his troubles, with the change of scene. We have invited them to make their head-quarters here. They plan to tour around, visit Yo-Semite, Big Trees, &.c. O this dreadful war! What an upsetting of plans it causes! Now we learn that James Hammond has decided to volunteer for service and not wait to be drafted. No better young man, or with brighter prospects can be found than Working for the S.P.R.R. and in lives for promotion for faithful services, he hears his country. call and responds (T.S.R. 55. 2 P.M. 80. S.S. 73.) Here am I! Send me.

Aug. 16. Thurs. Received a letter from Willie, in which he tells of welcome showers that have fallen in New England to break the drouth that has prevailed there for about a month at a time when the weather has been intensely hot, so that the crops are about half spoiled Walter has been awarded first prize for his school garden. (T.S.R. 52. 2 P.M. 81. S.S. 68.)

Aug. 17. Fri. Received letters from Eunice and Ada. We learn that James Hammond - one of the best of boys - has left his good position with the S.P.R.R. and volunteered to serve in the Army. He has been drafted but not called, so he prefers to volunteer, and has gone to training camp at Tanforan. Stella (Hammond) Baggs' husband has gone to the Army and Winnie has gone to San Jose to board with Stella and to Clerk in a store. Susie (Hammond) Mason's husband also has gone and she lives with her sister - Pearl Cook - in Sacramento. Nellie Hammond is a nurse in Dameron Hospital. So Roland's family is scattered. Bertie Thurber lives in Stockton - George, the only boy, is so afflicted with asthma that he could not serve in the army - We ask, When will this dreadful war come to an end? We know it will be as soon as the dear Father's will is accomplished. And He will care for His own (T.S.R. 54. 2 P.M. 85. S.S. 68.)

Aug. 19. Sabbath. S. School and C.E. Society meetings as usual but no preaching - as it is our pastor's vacation time. But he and his wife are at home from Mt. Diablo and "glad to get home" as he said. He and Mrs. S. were at S. School and he taught his class. Hannah had charge of the C.E in the evening. He says it is vacation for him to be able to work in his garden and read whenever he pleases. Celeste came home for the little time between trains. He has been promoted to Ass't Electrician for the S.P.R.R. - head-quarters in Stockton. On the train with him was Nathan Barbour, on a visit to his parents - He belongs to the unit of Homeopathie Doctors, who have pledged 10,000 members for the army, but as yet he has not been placed. Roswill has already gone with the Ambulance Corps and may even now be on his way to France. So Dr. and Mrs. Barbour have given up both their sons. Almost every family in this vicinity has surrendered one or more of its members. (T.S.R. 56. 2 P.M. 86. S.S. 75.)